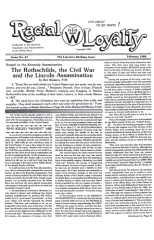 Sequel to the Kennedy Assassination. The Rothschilds, the Civil War and the Lincoln Assassination by Ben Klassen, P.M. 1. "If you like we shall divide the United States Into two parts, onefor you, James, and one for you, Lionel..." Benjamin Disraeli, (Son of Isaac D'Israeli and, secondly, British Prime Minister) toasting and bragging to Nathan Rothschild's boys at the wedding of their sister, Lenora, to their cousin Alfonso in 1857. 2. "We shall force the Christians into wars by exploiting their pride and stupidity. They shall massacre each other and clear the ground for us." From the funeral oration of Rabbi Reichhorn (Page 59 of the Rothschild Money Trust). ...