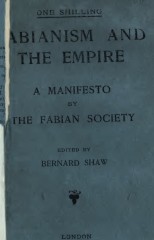 Author : Shaw Georges Bernard
Title : Fabianism and the empire A manifesto by the Fabian society
Year : 1900

EDITORS PREFACE. As the word editor is not a term of precision, it is necessary to explain that it means, in this instance, only the draughtsman employed by the eight hundred members of the Fabian Society to produce their Election Manifesto. The Society is alive to the importance of making its utterances readable ; and this can only be done by leaving the manner of their expression to a literary expert, and confining its dictation to the matter to be expressed. Further, it will be understood that the greatest common measure of the opinions of eight hundred persons is not the same thing as the opinion of every individual member, and that on certain points a wholly dissentient minority has been small enough to submit to being voted down. For example, some members regard the South African expedition as a foreseen and deliberate act on the part of the Government ; and of these, some consider it a political crime, and others a justifiable stroke of Imperial Statesmanship. Again, on the point of Army Reform, many members disapprove so strongly of war that they desire it to be understood that they endorse the pages which follow on that subject only as a Tolstoyan opponent of our criminal system might nevertheless provisionally advocate prison reform, or as a vegetarian might advocate municipal abattoirs. There are Fabian teetotalers, too, who refuse to say anything more for the municipal public house than to admit, doubtfully and reluctantly, that it is a more controllable evil than a brewer's tied house, and will not go even so far as that without an explicit affirmation that a more excellent way is not to have drinkshops of any sort. All reservations made, however, it may be taken that what is said in this Manifesto is what the great majority of the members of the Fabian Society desire to have said at the present moment. It must not be inferred from the restriction of the Manifesto to the general lines of the reforms advocated that these have been but superficially considered. Our allusion to the Drink Question, for instance, clearly does not exhaust it, since a considerable interval of regulation ofprivate enterprise lies between us and complete municipalization. But the tracts prepared by Mr. Edward Pease, and already issued by the Society, supply the lacking proposals. Again, the inevitableness of the Minimum Wage, which is no mere theoretic remedy, but the irresistible conclusion from a century of labor organization, has come out in the course of a unique investigation, the most elaborate and severe yet undertaken by individual Fabians, by Mr. § Mrs. Sidney Webb. It is recorded in their volumes entitled " The History of Trade Unionism 11 and M Industrial Democracy." The suggestion as to the provision of a Militia by raising the half-time age was first mooted by them in a letter to The Times last year. The important proposals as to the consular service are the outcome of a series of discussions initiated by Mr. S. G. Hobson, who was the first Fabian to see the value, as an illustration of the need for State organization of foreign trade, of the contrast between the imbecility and paralysis of English commercial diplomacy in the valley of the Yang-tse, and the victorious alertness and efficiency of Russia. As to Municipal Trading, those who are not yet alive to the fact that we are in the throes of a struggle—quite as important as the South African one—between the new local authorities, representing the citizenship ofEngland, and the company promoters, for the control of our common life industries, will find in the Fabian tract on " The Economics of Direct Employment, 11 and that on " The Growth of Monopoly" by Mr, H. W. Macrosty, a mass of facts which cannot be detailed in an Election Manifesto. The elector who votes in ignorance of these facts will vote on assumptions which, though they are unfortunately still the prevalent assumptions of our educated classes, have long ceased to have any relation to contemporary reality. For many valuable amendments and certain chastening criticisms, I am indebted to several members of the Society ; but those named above, with Mr. Gilbert Slater, have contributed as well as criticised. One of the reasons for issuing this Manifesto in the form of a shilling booh is that the custom of the Society, which is to sell for a penny a quantity of literary matter and political and statistical information which could not be commercially produced and sold for less than halfa- crown, has resulted in an undue specialization of its market. The richer classes in England read nothing but what their booksellers sell ; and booksellers cannot afford to sell penny pamphlets. It is one of the oddities of our competitive system that, out of the multitude of useful things that are sold for a penny, the millionaire can only obtain the penny stamp and the penny newspaper : if he wants the penny Fabian Tract he must either join one of the political or social organizations by which such wares are distributed (and their articles of faith are seldom such as a conscientious millionaire can subscribe), or else the Society must come to his rescue by charging him at least a shilling. It does so in this instance with many apologies for the smallness of the sum, which is, nevertheless, an exclusive one—how exclusive the reader will best appreciate after a reference to our " Facts for Socialists," facts which unfortunately remain facts from edition to edition, in spite of our sixteen years' struggle to awaken social compunction concerning them. G. B. S. ...