The Church of Ohio - 66 Questions and Answers on the Holocaust

By Balder Ex-Libris, Friday, March 16 2012. Permalink The Church of Ohio 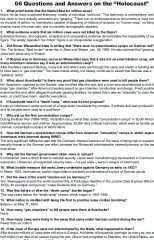 Author : The Church of Ohio
Title : 66 Questions and Answers on the Holocaust
Year : 19**

1. What proof exists that the Nazis killed six million Jews? None. All we have is postwar testimony, mostly of individual “survivors.” This testimony is contradictory, and very few claim to have actually witnessed any “gassing.” There are no contemporaneous documents or hard evidence: no mounds of ashes, no crematories capable of disposing of millions of corpses, no “human soap,” no lamp shades made of human skin, and no credible demographic statistics. 2. What evidence exists that six million Jews were not killed by the Nazis? Extensive forensic, demographic, analytical and comparative evidence demonstrates the impossibility of such a figure. The widely repeated “six million” figure is an irresponsible exaggeration. 3. Did Simon Wiesenthal state in writing that “there were no extermination camps on German soil”? Yes. The famous “Nazi hunter” wrote this in Stars and Stripes, Jan. 24, 1993. He also claimed that “gassings” of Jews took place only in Poland. 4. If Dachau was in Germany, and even Wiesenthal says that it was not an extermination camp, why do many American veterans say it was an extermination camp? After the Allies captured Dachau, many GIs and others were led through the camp and shown a building alleged to have been a “gas chamber.” The mass media widely, but falsely, continues to assert that Dachau was a “gassing” camp. 5. What about Auschwitz? Is there any proof that gas chambers were used to kill people there? No. Auschwitz, captured by the Soviets, was modified after the war, and a room was reconstructed to look like a large “gas chamber.” After America’s leading expert on gas chamber construction and design, Fred Leuchter, examined this and other alleged Auschwitz gassing facilities, he stated that it was an “absurdity” to claim that they were, or could have been, used for executions. 6. If Auschwitz wasn’t a “death camp,” what was its true purpose? It was an internment center and part of a large-scale manufacturing complex. Synthetic fuel was produced there, and its inmates were used as a workforce. 7. Who set up the first concentration camps? During the Boer War (1899-1902), the British set up what they called “concentration camps” in South Africa to hold Afrikaner women and children. Approximately 30,000 died in these hell-holes, which were as terrible as German concentration camps of World War II. 8. How did German concentration camps differ from American “relocation” camps in which Japanese- Americans were interned during WWII? The only significant difference was that the Germans interned persons on the basis of being real or suspected security threats to the German war effort, whereas the Roosevelt administration interned persons on the basis of race alone. 9. Why did the German government intern Jews in camps? It considered Jews a direct threat to national security. (Jews were overwhelmingly represented in Communist subversion.) However, all suspected security risks – not just Jews – were in danger of internment. 10. What hostile measure did world Jewry undertake against Germany as early as 1933? In March 1933, international Jewish organizations declared an international boycott of German goods. 11. Did the Jews of the world “declare war on Germany”? Yes. Newspapers around the world reported this. A front-page headline in the London Daily Express (March 24, 1933), for example, announced “Judea Declares War on Germany.” 12. Was this before or after the “death camp” stories began? This was years before the “death camp” stories, which began in 1941-1942. 13. What nation is credited with being the first to practice mass civilian bombing? Britain— on May 11, 1940. 14. How many “gas chambers” to kill people were there at Auschwitz? None. 15. How many Jews were living in the areas that came under German control during the war? Fewer than six million. 16. If the Jews of Europe were not exterminated by the Nazis, what happened to them? After the war millions of Jews were still alive in Europe. Hundreds of thousands (perhaps as many as one and a half million) had died of all causes during the war. Others had emigrated to Palestine, the United States, and other countries. Still more Jews left Europe after the war. ...