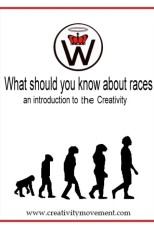 Author : The Creativity Movement
Title : What you should know abort races an introduction to the Creativity
Year : 2010