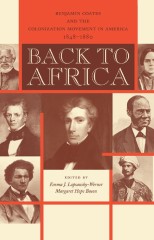 PREFACE. The United States is a nation of immigrants. Beginning—we believe—with immigration from Asia tens of thousands of years ago, continuing with immigration from Europe and Africa several centuries ago, then picking up velocity in the eighteenth, nineteenth, and twentieth centuries, a diverse collage of peoples and cultures have created a heterogeneous mix on the North American continent. But for at least the last few centuries, immigration and emigration have been contentious subjects, shaping Americans’ notion of race, landownership, and the management of social problems. Though Americans have not always been welcoming to newcomers, the Statue of Liberty remains the symbol of our conviction that relocation can relieve the tired, poor, and huddled masses from the pain of social oppression. This volume highlights one subtheme that is part of that conviction. It explores the relationship between the abolition of slavery and the establishment of a black colony in West Africa, as seen through the essays and correspondence of one resolute Quaker, Benjamin Coates. Coates, a businessman with international connections, described himself as “a thorough abolitionist, who could not be such without being a Colonizationist” (Letter 87, Benjamin Coates to William Coppinger, June 6, 1866). In pursuit of this single-minded mission, Coates made friends with Joseph Jenkins Roberts, Liberia’s first black president. He also kept up a brisk correspondence with others across the world that he hoped to enlist in these causes. In 1998, Haverford College purchased the collection of the more than 100 letters that form the nucleus of this volume. These letters were written by various nineteenth-century abolitionists to Philadelphia Quaker Benjamin Coates, one of the best-known nineteenth-century white supporters of African colonization. But Coates was more than a Quaker and a supporter of colonization; he was a dedicated, lifelong member of the Religious Society of Friends, and it was this dedication that shaped his deep connection to Haverford College. Haverford was the first college established by the Religious Society of Friends, and Coates served as a member of the college’s governing board and probably helped to support several of his nephews while they studied at Haverford in the 1850s and 1860s. ...