Crowley Aleister - The Greater Ritual of the Pentagram 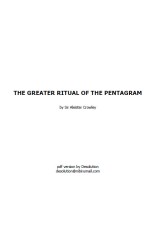 THE TRUE GREATER RITUAL OF THE PENTAGRAM. As the Lesser Ritual of the Pentagram places the Magician on the Path of Samech, so this Greater Ritual places him on the Path of Gimel above, instead of below Tiphareth. Perform the Lesser Banishing Ritual of the Pentagram and annoint body with Holy Oil before performing this Greater Ritual of the Pentagram. Take up your position facing the West, strike the bell once and cry aloud Abrahadabra! giving the Threefold Sign of Enterer (Horus), Silence (Harpocrates), and Apophis (Set Triumphant). Whirl around as on a pivot as rapidly as you can with the Wand or Sword outstretched, thus making a magick circle. Then say, with all the exaltation possible: The light is mine; its rays consume me: I have made a secret door into the House of Ra (Enterer towards East) and Tum (Enterer towards West), of Khephra (Enterer towards North) and of Ahathoor (Enterer towards South). (In centre, facing West, in Sign of Silence) I am thy Theban, O Mentu, The prophet Ankh-af-na-khonsu! Bell. Turning 60 degrees to your left, make the inverted Invoking Pentagram of Fire and cry NUIT. Turning 60 degrees to your original right (i.e. to the North of West) make the same Pentagram and cry HADIT. Turn to the East, make the same Pentagram and cry RA-HOOR-KHUIT. Then turn 60 degrees North of East, make the erect Invoking Pentagram of Fire and cry BES-NA-MAUT. Then turn 60 degrees South of East, make the same Pentagram and cry TA-NECH. Then to the West, make the same Pentagram and cry ANKH-AF-NA-KHONSU. Seat yourself with your hands on your knees, like an enthroned Egyptian God, or stand in the Sign of Hoor- Paar-Kraat.Say slowly, and very forcibly, in a low voice: Ardent and awful on my right Rage Ratziel and Tzadkiel. Red Raphael on his burning throne Guards me behind: with magian might Dread Khamael and Tzaphkiel War on my left: the avengers own Before me flaming out alone The Majesty of Metatron! For around me in six several ways The fivefold sword-stars beat and blaze; While in the column shines and slays The star that hath eleven rays. Abrahadabra! Bell. Rise and give the Threefold Sign, remaining in the Sign of Apophis- Typhon to invoke whatever force thou wishest to invoke. ...