Crowley Aleister - The old and new Commentaries to Liber Al 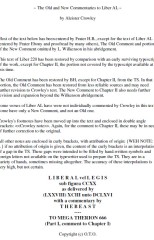 Most of the text below has been entered by Frater H.B., except for the text of Liber AL (entered by Frater Ebony and proofread by many others), The Old Comment and portions of the New Comment omitted by L. Wilkenson in his abridgement. This text of Liber 220 has been restored by comparison with an early surviving typescript of the work, except for Chapter II, the portion not covered by the typescript available at this time. The Old Comment has been restored by BH, except for Chapter II, from the TS. In that portion, the Old Comment has been restored from less reliable sources and may need further revision to Crowley's text. The New Comment to Chapter II also needs further revision and expansion beyond the Wilkenson abridgement. Some verses of Liber AL have were not individually commented by Crowley in this text. Some have only a New Comment, and not an Old one. Crowley's footnotes have been moved up into the text and enclosed in double angle brackets: <<Crowley note>>. Again, for the comment to Chapter II, these may be in need of further correction to the original. All other notes are enclosed in curly brackets, with attribution of origin: {WEH NOTE: ...} if no attribution of origin is given, the content of the curly brackets is an interpolation of a gap in the TS. These gaps were intended to be filled by hand-written symbols and foreign letters not available on the typewriter used to prepare the TS. They are in a variety of hands, sometimes missing altogether. The accuracy of these interpolations is very high, but not certain. ...