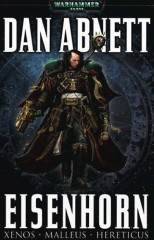 THE INQUISITION IS feared throughout all the worlds of the Imperium. They are the Emperor's avenging flame, routing out heresy and corruption in all of its guises. Gregor Eisenhorn is one such man - chosen for his unswerving faith, iron will and dogged persistance. Despite being a puritan dedicated to the destruction of Chaos and all its dark followers, even Eisenhorn becomes tempted to use the vast power of Chaos against itself. By crossing the line into radicalism he takes his first step along the dangerous path to become the very thing he has sworn to destroy. Epic and engrossing, the Eisenhorn trilogy is amongst the best fiction ever produced by the Black Library and has attracted a huge number of fans. Dan Abnett explores the 'real' worlds behind the battlefields of the Warhammer 40,000 universe, showing readers a side of this dark and gritty future that has never been explored so closely. A well-known and popular comic writer, Dan Abnett has worked on world-famous strips like Superman and the X Men, as well as creating many much loved characters for the LIK's 2000AD. ...