Reed Douglas - A prophet at Home 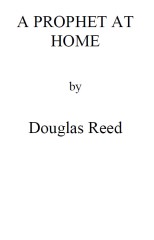 AUTHOR'S NOTE. When I had written two-thirds of this book I decided to call it 'The Decline To Fall of the British Empire', as I felt by that time able, with grateful glee, to bury the foreboding which led me to say, in its predecessor, Disgrace Abounding, that, by all the portents of that disastrous time, the title of the third book would have to be 'The Decline And Fall Of the British Empire'. My publisher, however, tells me that the title, 'Decline To Fall', would certainly be misunderstood and would lead to confusion, and as I always bow to his excellent judgment in such things the cover and the title-page of the book bear the title, A Prophet At Home. For me, nevertheless, the book remains 'The Decline To Fall', as I feel that this best expresses my mind, and the reader will find several passages which allude to this title. I owe him this explanation. ...