Reed Douglas - The Grand Design of the 20th Century 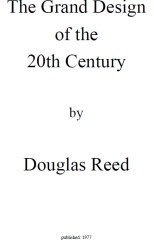 INTRODUCTION. The ways in which people try to explain what is happening in the world around them, whether in politics or economics, can be divided roughly into two classes. Or, as some would put it, there are two theories of contemporary history. The one held by the majority of people hardly deserves to be called a theory, but if that word must be used, then let us call it "The Idiot Theory". Why "The Idiot Theory"? Because it insists that no one is to blame for the way history unfolds; things just happen. Likewise, the actions and policies of politicians, when they produce results we don't like, are simply the product of mistaken ideas, misunderstandings, lack of sufficient information. Or, as some Americans would say: "History unfolds as the cookie crumbles" - the precise way in which the proverbial cookie crumbles being beyond all human control. The late President Roosevelt, possibly in an unguarded moment, made a simple statement of the rival theory when he remarked: "Whatever happens in politics, you may be sure there is someone who wanted it to happen and made it happen". He would have had much to answer for if that test had been applied to all that happened while he was President of the United States. Douglas Reed was foremost among those who declared, with Roosevelt, that when things happen in the world of politics and economics, especially when they continue to happen with marvellous consistency, then they are being made to happen and are meant to happen. His experience before World War II as the London Times's Chief Foreign Correspondent in Europe, his familiarity with all the principal actors in the unfolding dramas and tragedies of those years, left him in no doubt that politicians, as a rule, are activated always by motives, and very often by motives which they take the greatest care to conceal. The real task for the investigator, therefore, is to look for and find the motive. Like so many before him and after him, Reed had merely rediscovered a piece of ancient wisdom which the Romans summarised in two words pregnant with meaning: Cui Bono? Or, as we would say when trying to unravel some political mystery: Who stands to benefit? In this little book Douglas Reed presents in a highly compressed form the story which emerges when this simple test of cui bono? is applied to all that has happened in the world since before the beginning of the 20th Century, right up to the present day. It is a simple, well written story which helps us to understand that changes in the world which disturb most ordinary people, leaving them confused and worried about the future, have been deliberately brought about and are part of a conspiratorial jig-saw puzzle which he has described as "The Grand Design". Reed rendered a most valuable last service shortly before his death in August 1976 by reducing to some 13,000 words a history of our century which could be expanded into enough books to fill a large library. Those wishing to emancipate themselves from that sickness of mind and heart engendered by what they are told by the mass media will be greatly helped by this brilliantly written summary which serves as an introduction to the masses of excellent literature available. Indeed, there is not a page in Reed's little book which could not be expanded into a large book. In many cases the necessary books are already available. The mention of the American traitor Alger Hiss, for example, reminds us that a long shelf would be needed to accommodate the books which have been written on this subject alone, the best of them being Witness, by Whittaker Chambers, the former Communist, whose evidence it was which sent Hiss to prison for three years. Can the story of The Grand Design be still further compressed? We can but try! Conspiratorial activity has been going on from time immemorial, conducted by different groups with different ends in view. Winston Churchill, writing with all the authority of a member of the British Cabinet, made it clear in 1922 that he regarded the Bolshevik Revolution, like the French Revolution over 100 years earlier, as part of what he called "a worldwide conspiracy". That, however, is only one half of the story of The Grand Design of which Douglas Reed writes. The other half can be traced back to Cecil Rhodes, the South African multi-millionaire mining magnate, who had grandiose visions of a world government to be run mainly by people of his own Anglo-Saxon race, with some assistance from their cousins the Germans. This scheme he launched with his millions and it blossomed after his death into the Rhodes Scholarship Trust, the Royal Institute of International Affairs and similar organisations in America, the most important of these being the Council on Foreign Relations. Cecil Rhodes, we may be sure, would turn in his grave if he could see what has happened to his own secret and semi-secret enterprise, with its huge funds and its highly intellectualised and inflated "idealism" supplied by John Ruskin, high priest of Britain's so-called Pre-Raphaelite movement in art and literature. Rhodes would find that it has been taken over by that other lot of conspirators (mentioned by Churchill), whose "ideal" of world government is best exemplified by what has happened in the Soviet Union. So today the conspiracy is like a highjacked airliner. Many of the passengers, still hypnotised by the Rhodes "vision" think they know where they are going, while the highjackers, with 2000 years of conspiratorial training and experience behind them, KNOW where they are going - and it is not the destination the passengers have in mind. It needs only full exposure to thwart and destroy a criminal conspiracy which has many wellintentioned but misguided people in its thrall - and no one has contributed more to the process of exposure than Douglas Reed. IVOR BENSON. February, 1977. ...