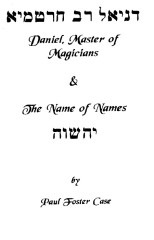 Introduction. Paul Foster Case (1884-1954), the author of these texts, is known to students of the Secret Wisdom as an unexcelled authority on the esoteric teachings of Tarot, Qabalah, and Alchemy. Dr. Case's linkage with the secret Mystery Schools that preserved the true Christ teachings is indicated also by several other of his works, which include: THE TRUE AND INVISIBLE ROSICRUCIAN ORDER; TAROT, KEY TO WISDOM OF THE AGES; THE BOOK OF TOKENS; THE MAGICAL LANGUAGE; THE GREAT SEAL OF THE UNITED STATES; THE MASONIC LETTER G. Besides being the producer of these works in book form, Paul Case was the founder of Builders of the Adytum, a non-profit organization which is the custodian and disseminator of his incomparable works on esoteric subjects. These are presented in graded lesson form. Through the lessons the same spiritual unfoldment can be attained today as was possible only for Mystery School students in former world periods. Dr. Case was chosen by the Third Order for the transmission of Western Mysteries for this period. His work was to perserve, extend and update the teachings that have always existed since the beginning of the world. Human consciousness, as a whole, has evolved a capacity for individuality and intellectual comprehension that did not exist to the same extent in former ages. These new human capacities - indicated exoterically by the advancements of the 'scientific age - had to be taken into account. Initiation today cannot be attained in the same manner as it was in former ages. For a modern aspirant to experience the inner worlds in the right way he must be prepared with a mental comprehension that harmonizes with the present evolutionary deirelopment of humanity. This is precisely what the spiritual teachings of B.O.T.A., initiated by Paul Case, take into full account. For this reason, the Western Mystery training system is more valid for the modern Western aspirant than the older Eastern system. These methods allow for the freedom and independence of the Western student; a freedom which this treatise indicates as being the fiuit of a continuously growing grasp of Reality. Indeea, as you will read, the true meaning of the Name of Names is "that which was, is and shall be; the nature of Reality liberates." The reality that liberates includes levels of existence beyond those we can experience through the physical senses. To be able to enter fully into the Larger Reality is the essence of the freedom which awaits us as we become ever more conscious of Christ as the Divine Ego, the Central Presence seated within the heart of every human being. May Light Be Extended upon You, BUILDERS OF THE ADYTUM. ...