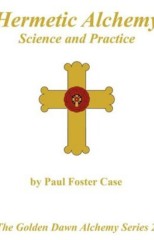 INTRODUCTION. When Paul Foster Case published this Magnum Opus in 1931, it reflected a period during which he chose to write very clearly. Paul Case later mentioned that it was a mistake to give out this alchemical material "too easily". After preparing the outstanding 'Tarot Fundamentals' and 'Tarot Interpretation' lesson series as well as the 'Tree of Life' courses, Paul created the 'Great Work' course but decided to write in a more cryptic manner with regard to Alchemy. Students who have diligently studied the material and performed the corresponding meditations in the preparatory lesson courses mentioned above, are very well prepared to grasp the inner meaning of the 'Great Work' course. Please note that all of the courses mentioned above as well as many others are still available from the Builders of the Adytum by making application via the web site (www.bota.org) or by writing to 5105 N. Figueroa St., Los Angeles, CA 90042 and requesting an application. This book will be of great value to those who have not had the opportunity to pursue the B.O.T.A. lesson series through the 'Great Work' course but would like to study Alchemy from one of the greatest leaders of the Golden Dawn in the 20th century; those who have already progressed to Paul Case's 'Great Work' course will find this current volume of interest in tracing the evolution of his thought and assisting them in understanding some of the more cryptic aspects of the newer course. Please note that in this text, Paul Case appears to refer to Alchemy as if it was a homogenous field of study but it may be better understood as a process of transformation with various independent factions which, in some cases, have very little to do with each other. For example, it is Paul Case's view that "true" alchemists were not referring to external laboratories and he emphatically states that they were referring to various grades of consciousness as well as the physical human instrument. Well this is definitely true of the particular group of writings that Paul is quoting from, this cannot be assumed across all alchemical literature. In fact there are hundreds of alchemical documents that are referring precisely to laboratory alchemy and do not in any manner refer to the Spiritual Alchemy described in this text. Paul's view is that such Alchemists misunderstood the "real" alchemists endowed with the oral tradition. Rather the evidence supports the view that there was a faction of Alchemists that did involve themselves solely with the study of purely physical processes. Though Spiritual Alchemy is of the greatest importance in serving as a valuable key to understanding the Golden Dawn Rituals and Teaching, one can not completely dismiss the value of "Lab Alchemy". Observing the changes in color and form of the various materials undergoing chemical change and processes such as extraction, distillation, etc., certainly will develop a deeper understanding of Spiritual Alchemy. But make no mistake, a "plant stone" or "mineral stone" made in a laboratory, will confer no special powers upon the participating alchemist; rather one can view the observed laboratory processes as a potent series of meditations. The "First Matter" in this text is the Alchemist himself and the alchemical process described is the transmutation of the subject's own body and consciousness into that of the "Philosophers' Stone." Also note that Paul Foster Case states that the Qabalah provides the necessary key to understanding the oral tradition of Alchemy. While this is certainly true of a certain class of alchemical literature, particularly from a select group of alchemical writings from the 16th century onwards, it cannot be applied to the vast corpus of alchemical literature without discrimination. In the introductory chapters, Paul Case makes a strong and compelling argument that Western Alchemy and Eastern Yoga are describing the same fundamental reality. But interesting enough, one finds very little Eastern Yoga style practices in the B.O.T.A. curriculum at any level; rather Paul warns repeatedly that such practices can only by safely performed under the guidance of a qualified teacher and definitely not simply out of a book. To this I concur and also note that the various systems of Yoga can be understood from within the basic structure of the Tree of Life and do form the basis of a comprehensive system of alchemical transformation. Such a system is best undertaken from someone in a controlled environment who has completed the corresponding transformation themselves. We are reminded again that one must have the Stone to make the Stone. Here for the first time in over 75 years are Paul Foster Case's advanced aspects of the Alchemical Process, the Twelve Stages of the Great Work, and practical instruction publicly available to students of the Golden Dawn Tradition. It is with great pleasure that we introduce the second volume of the Rosicrucian Order of the Golden Dawn's 'Golden Dawn Alchemy Series', a collection of distinguished books on Alchemy written by leaders of the Golden Dawn Tradition. Enjoy ! Tony DeLuce Laguna Niguel, CA. March 19,2009. ...