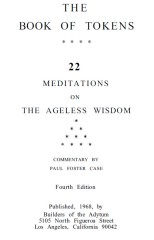 PREFACE. These unusual and beautiful Qabalistic meditations were inspirationally written by the recognized world authority on Tarot and Qabalah, Dr. Paul Foster Case. Because of having attained both inner and outer Initiation into the most advanced Grades of Adeptship in the Western Mystery training system, he was able to attune his consciousness to the highest spiritual levels, as is evidenced by the text. It is profitable to read the meditations aloud. They are written in the first person; hence this practice gives them a potent auto-suggestive influence for counteracting negative patterns in subconsciousness. Moreover, even a casual survey of the text shows it to be the Self-declaration of the Divine Spirit in man. To read it aloud is, in a measure, to participate in the illumination of the sage through whose mind the Life-power formulated its Self-expression in these stirring phrases. The meditations in this book include the occult meaning of the twenty-two Hebrew letters, illustrated by the tventy-two Major Tarot Keys which correspond thereto. The Tarot Keys represent the symbolic Powers of Consciousness in pictorial form, used by Initiates for the transmutation of personality and the attainment of Union with God. Comment has been reduced to such explanation as seems required to make certain Qabalistic terms intelligible to the uninitiated. Paragraphs of the comment are numbered the same as the paragraphs of the text. Dr. Paul Foster Case founded BUILDERS OF THE ADYTUM, a non-profit organization, in order to assure the survival and extension of the Hermetic Sciences, which the Adepts who had gone before him placed in his care. The modesty of this great soul is revealed by the fact that he rarely thought to put his signature to the voluminous writings and lessons on Ageless Wisdom which he left to posterity in the care of BUILDERS OF THE ADYTUM. Dr. Case entered into his life's work at a very early age, due to his recall of past lives as a Qabalistic Initiate and Adept His mission: to translate, enlarge and extend hitherto secret Techniques of Tarot and Qabalah (esoteric teachings of the Ageless Wisdom) into terms understandable to and usable by the modern mind; to assure that this and coming generations would have available the timeless methods of Initiation in the Western Occult tradition which leads to spiritual and psychological integration, unfoldment and Illumination. Paul Foster Case came into incarnation in order to fill a great spiritual need for the modern world. His unique and effective contribution to the spiritual Path of Return being completed, he withdrew from his physical vehicle on March 2, 1954. It is our profound privilege and grave responsibility to carry on the GREAT WORK which Dr. Case left in our care. Correspondence lessons on Occult Psychology, Tarot, Holy Qabalah, Spiritual Alchemy, etc., as well as books, pamphlets, Qabalistic Tree of Life diagrams and Tarot Keys are available to interested aspirants. Write to: BUILDERS OF THE ADYTUM 5105 North Figueroa Street Los Angeles, California 90042 To you, who are about to be touched by the Ineffable via the BOOK OF TOKENS, MAY LIGHT BE EXTENDED UPON YOU. In L. V. X. (Light), The Grand Chapter, Builders, of the Adytum. ...