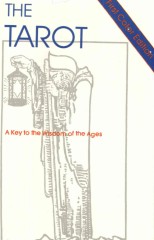 Author : Case Paul Foster
Title : The Tarot A key to the Wisdom of the Ages
Year : 1947

PAUL FOSTER CASE needs no introduction to those fortunate enough to have known him as a teacher and lecturer. To those who met him first through the pages of this book, a few words about his background and varied activities, will be of interest. Dr. Case came from a straight Yankee ancestry on both sides: back to bashful Miles Standish on his mother's side, and from a family of clipper and coast-wise skippers on his father's. He was born in Fairport, New York, in 1884. He passed on in 1954. As a mere lad of sixteen, he became interested in the theatre and for twenty or more years, engaged in various enterprises: a season with a showboat in the early years, as a musical director, up through musical comedy to vaudeville in its hey-day. His interest in Tarot dated back to 1900 and was provoked by a question made by Claude Bragdon, "Case, where do you suppose playing-cards came from?" His inquisitive mind led to the study of the Tarot and, thus, to occultism, which had been prepared for by an early interest in psychology. His Yankee inheritance of common sense and early training gave Dr. Case a firm and scholarly foundation for his writings and teaching. His first work on Tarot appeared in iShe Word magazine; this was followed by a series of articles in Azoth. He succeeded Michael Whitty as editor of the latter magazine. In 1922, Dr. Case began lecturing and teaching Tarot and related subjects; he became the Praemonstrator General (Supreme Chief) of the Order of the Golden Dawn for the United States and Canada and later resigned in order to found The Builders of the Adytum for the study of practical occultism. Ann Davies succeeded him as head of Builders of the Adytum, which has become a world-wide organization with Headquarters in Los Angeles, California W042. Dr. Case wrote , extensively on Tarot, Qabalah, Rosicrucianism, Alchemy, Magic, and Correlation of Color and Sound in Healing. One of his interesting hobbies was legerdemain; he was a member of the International Brotherhood of Magicians and International Guild of Prestidigitators. Out of Dr. Case's busy days of teaching and lecturing, and with a rich background of tradition and experience, he found time to write a unique book-his gleanings of the wisdom of past ages. ...