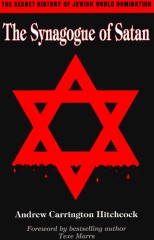 Blood Secrets of the Synagogue of Satan. One group and one group alone is responsible for virtually all wars and bloodshed on the face of this planet. This evil cabal is few in numbers but, like a deadly octopus, its tentacles reach out to grip and strangle untold multitudes of innocent victims. The initiates of every secret society and internationalist organization, from the Council on Foreign Relations and the Jesuits to the Bilderbergers and the Order of Skull & Bones, obey the dictates of this sinister group and tremble when standing before its leaders. The cabalist group I refer to is the Synagogue of Satan, an ancient, yet modem elite so politically powerful and so fabulously wealthy that even past history has been twisted, reshaped, and revised to meet its preferred version of humanity's gloomy, totalitarian future. Religious and racial in nature, the Synagogue of Satan is, at its essence, a grotesque, satanic cult. Its high council is composed of High Priests of Lucifer; these are men who literally worship death while practicing sexual magick and occult rituals of the blackest nature. Regrettably, this Luciferian cabal of high priests is supported by over eighteen million people around the globe who call themselves "Jews." Some of these people, a great many, are fanatical in their support of the Synagogue of Satan. They go by the name, "Zionists." Others provide the Cabal with only token, often nominal, support. These eighteen million Jews are joined in their often zealous embrace by a great number of Gentiles who are also boastful of being Zionists. While these Gentile supporters are, on the whole, woefully ignorant of the horrific, ultimate goal of the Synagogue of Satan, their support and service to the cause of Lucifer helps drive the global Synagogue of Satan's never-ending successful campaigns of revolution, war, famine, financial calamity, and bloodshed. Given the proven fact that the elitist High Priests of Lucifer who comprise the Synagogue of Satan and their servants possess ownership of almost every major book publishing firm in the world, rarely is a book or volume ever printed that has the courage and audacity requisite to expose the ongoing conspiracy of this monstrous group. I am, therefore, extremely pleased to recommend to thinking men and women this excellent volume, The Synagogue of Satan, by Britain's Andrew Hitchcock. You will find it to be a useful, revealing, and accurate historical guide to the sinister crimes and dark events that have propelled the Synagogue of Satan to the precipice of world power. The term Synagogue of Satan is biblical in origin. As Mr. Hitchcock notes, the book of Revelation in the Holy Bible minces no words. God warns us of the horrendous and diabolical power to be wielded in the last days by the entity identified as the "Synagogue of Satan." What is most fascinating, however, is that the scriptures clearly tell us that the evil leaders of this entity are not Jews! Yes, they say they are Jews, and the world recognizes them as Jews, even as "Israel," but they lie! Listen to what God's Word reveals: "/ know the blasphemy of them which say they are Jews, and are not, but are the Synagogue of Satan." (Revelation 2:9) Mind-boggling, isn't it? These wicked, world powerbrokers want us to believe they are Jews; they boastfully lay claim to Israel as their heritage. But, in reality, they are blasphemous liars. What is going on here? Given the fact that the masters of the Synagogue of Satan today possess such incredible and extraordinary influence over the media, it stands to reason that the average world citizen easily falls for the Lie. People everywhere trust these great and beneficent leaders who say, "We are Jews" to be exactly that: Jews. No wonder the Apostle Paul warned that Satan's disciples come disguised as "ministers of righteousness" and as "angels of light." In the case of the minions of the Synagogue of Satan, they come to us disguised as "God's Chosen," as "Israel," as the One Race selected by God to produce in the future a Messiah (not Jesus!) for eternity. We are Jews, they proudly boast while, at the same time they suggest that others-that is, the defective lower and inferior races-are obligated by God to bless them, to follow the "Jews" lead, to bow down and serve them as "God's Chosen." "Yes," they arrogantly explain, "we are Jews, and you are goyim (cattle), and we have been chosen by divine edict to rule over you and over the entire planet." Shocking as it is, these claims by the Jewish pretenders of racial superiority, even Super Race consciousness, have for the most part been accepted by Christian evangelicals as legitimate, authoritative, and coming direct from God. Christian evangelicals say it is the lot of the Gentiles to bow down and accord virtual god-like status to the "Jews" and to their newly formed political entity, Israel, lest God be angered and curse and punish those who resist the Jews and their artificially created nation, "Israel." Sadly, nowhere in the established Christian Church can be found a pastor or evangelist today who has the spiritual wisdom, or even the common sense, to ask the cardinal question, "Who is this Synagogue of Satan that God warns about in the book of Revelation?" And nary a soul seems to ask the correlating question, "Just who are these wicked imposters of whom God warns will say they are "Jews" and are not, but do lie? ...