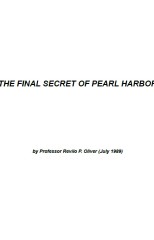 I have just seen the disclosure of a crucial historical fact, hitherto kept profoundly secret by the rulers of the United States, which will force you, as it has forced me, drastically to revise our understanding of recent history. It is an article, entitled "Tigers of a Different Stripe," by Don McLean in 'Soldier of Fortune', January 1989. I am convinced that it is not a canard. There is no indication that Yahweh's venomous race, the world's Masters of Deceit, contrived or inspired the article, which surely does not serve their purposes. Mr. McLean gives precise references to documents now in the archives in Washington, and even reproduces two of them photographically. It is likely that there are still in the United States, and conceivably even in universities, American historians who are more interested in establishing historical facts than in pleasing their paymasters; they will surely look for documents thus specifically and precisely designated and verify them. And finally and most cogently, the fact now disclosed fits so perfectly a gap in our present knowledge that it has the logical validity of a piece of a jigsaw puzzle put into its place. I thought that I had disclosed in *America's Decline*, the ultimate secret of Pearl Harbor, the fact that the unspeakably foul energumenon called Franklin Roosevelt, in January 1941, almost a full year before the attack on Pearl Harbor, had incited the Japanese by informing "in strict confidence" the Portuguese Ambassador that his countrymen need not be concerned about their colonies in the Orient because the United States was going to attack Japan when her military forces were extended to the limit and most vulnerable, and would thus destroy Japan. The Ambassador naturally cabled the good news to his government in his most secret code, which the Japanese had compromised and were reading currently. And the success of the diseased monster's scheme was attested a few days later when the Portuguese message was quoted in Japanese diplomatic messages that American cryptanalysts were reading. (1) The Japanese were thus led to believe that the Americans would soon attack them, and that they should therefore gain the advantage of surprising the enemy that intended to surprise them. (1. Professor James Martin informs me that the parts of "Magic" that have been made public do not include the messages to which I refer. This would indicate that the Army is still trying to keep this much of the great War Criminal's treason secret, but after the disclosures in *Soldier of Fortune* that will no longer be worthwhile.) I erred grossly in the conclusions which I drew from that fact. I assumed that the loathsome creature had been bluffing, and that the Japanese had blundered in being taken in by what was just another of his innumerable lies. (2) In 'America's Decline', again in "*The Yellow Peril*" and especially in *Liberty Bell*, April 1984, pp. 5-7, where I condemned the Japanese for ignoring their own best interests when they decided to attack Pearl Harbor instead of honoring their obligations under their treaty and alliance with Germany, thus precipitating the catastrophe in the West and the Suicide of Europe, I was thinking in terms of an American expeditionary force in hundreds of ships carrying thousands of American soldiers to the Orient to be killed for the delight of the monster and the ophidian race to which he partly belonged. I thought it was certain that the loathsome creature could not have sent such an expedition to attack Japan without preparations that would have alarmed even the dullest of the boobs in a nation that preponderantly wished to remain at peace. ...