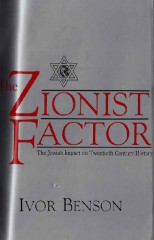 As the challenges of the 21st century beckon and threaten America and the West, it is more vital than ever that we understand the forces that move the world's-and thus our own-affairs. Are these motive forces always as they are reported in our newspapers and taught in our schools? Or are such recent, earth-shaking events as the collapse of Soviet Communism, the Gulf War, and the never-ending Middle East crisis linked by a common, invisible thread? In the Zionist Facror, veteran British journalist Ivor Benson uncovers long-suppressed evidence of the dynamic, critical Jewish role in events as diverse, and as momentous, as the Bolshevik Revolution, the formation of the modem state of Israel, the dizzying ascent of both Communism and capitalism, and the anti-colonial and post-colonial upheavals throughout the Third World. The Zionisr Facmr crackles like an espionage thriller with drama and revelation; it explains and instructs like a goldentongued orator; and it seeks neither to blame nor to condone, only to understand. After gaining-thanks to Mr. Benson's probing and unflinching analysis-a clear-eyed glimpse through the sham and artifice of today's "information managers," 110 one need ever look at world politics lhrot~gh the false spectaCles of the media and the diploma mills again. ...