Benson Ivor - This Age of Conflict 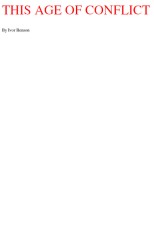 Author : Benson Ivor
Title : This Age of Conflict The source and technology of illegitimate power
Year : 1988

ABOUT THE WRITER: Ivor Benson is a former South African and Fleet Street, London, journalist; South African Broadcasting Corporation news analyst and commentator 1963/64; Information Adviser to Ian Smith's Rhodesian Front Government 1964/65; political analyst and author of several books, he has traveled widely. Who controls the past controls the future; who controls the present controls the past George Orwell. It is almost a joke now in the Western world, in the 20th century, to use words like 'good and 'evil'. They have become almost oldfashioned concepts, but they are very real and genuine concepts. These are concepts from a sphere which is higher than us. And instead of getting involved in base, petty, short-sighted political calculations and games. we have to recognize that the concentration of world Evil and the tremendous force of hatred is there and it's flowing from there throughout the world. And we have to stand up against it and not hasten to give to it, give to it, give to it, every-thing that it wants to swallow. Alexander Solzhenitsyn. ...