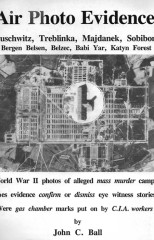 Introduction: 1. Objective when I started research: My objective was to analyze aerial photographs of World War II German controlled detention camps in Poland for evidence to confirm the claims that mass murders, burials, and cremations had been conducted there, and to compare this evidence with information from other locations where mass executions or deaths together with mass burials had occurred. 2. Method: I reviewed the books listed in the references and then compared these allegations for each of the alleged mass murder camps with the evidence revealed from studying the air photos. Enlargements were made of important pictures. 3. Chapter arrangement: Chaper 2 to 4 reviews areas like the Katyn Forest where mass burials occurred, chapter 5 reveals air photo evidence about whether mass murders and cremations were being conducted at Auschwitz or Birkenau, chapter 5.4. shows evidence which I believe proves marks were added to 1944 Auschwitz air photos before their public release in 1979, and chapter 6 to 10 shows the alleged Treblinka, Belzec, and Sobibor camps from 1940 to '44 and the Babi Yar ravine as it looked in 1943. 4. Nothing is hidden f rom air photos: Looking at the air photos will be just as if we went back in time to World War II to take a series of airplane flights over the different areas. ...