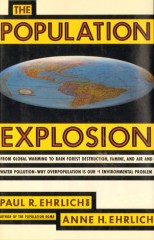 In 1968, The Population Bomb warned of impending disaster if the population explosion was not brought under control. Then the fuse was burning; now the population bomb has detonated. Since 1968, at least 200 million people-mostly children- have perished needlessly of hunger and hunger-related diseases, despite "crash programs to 'stretch' the carrying capacity of Earth by increasing food production." 2 The population problem is no longer primarily a threat for the future as it was when the Bomb was written and there were only 3.5 billion human beings. The size of the human population is now 5.3 billion, and still climbing. ln the six seconds it takes you to read this sentence, eighteen more people will be added. 3 Each hour there are 11,000 more mouths to feed; each year, more than 95 million. Yet the world has hundreds of billions fewer tons of topsoil and hundreds of trillions fewer gallons of groundwater with which to grow food crops than it had in 1968. ln 1988, for the first time at least since World War II, the United States consumed more grain than it grew. About a third of the country's grain crop was lost to a severe droughtroughly the fraction that is normally exported. Over a hundred nations depend on food imported from North America, and only the presence of large carryover stocks prevented a serious food crisis. lt is not clear how easy it will be to restore those stocks. World grain production peaked in 1986 and then-for the first time in forty years-dropped for two consecutive years. ln just those two years, the world population rose by the equivalent of the combined citizenry of the United Kingdom, France, and West Germany. Global food production per person peaked earlier, in 1984, and has slid downward since then. ln Africa south of the Sahara, production per capita has been declining for more than twenty years and in Latin America.since 1981.4 And the prospects for unfavorable weather for agriculture may be rising as burgeoning populations add more and more "greenhouse" gases to the atmosphere. The Population Bomb tried to alert people to the connection of population growth to such events. The book also warned about the greenhouse warming and other possible consequences of "using the atmosphere as a garbage dump." lt concluded: "ln short, when we pollute, we tamper with the energy balance of the Earth. The results in terms of global climate and in terms of local weather could be catastrophic. Do we want to keep it up and find out what will happen? What do we gain by playing 'environmental roulette'?" 5 What indeed? We've played, and now we're starting to pay. The alarm has been sounded repeatedly, but society has turned a deaf ear.6 Meanwhile, a largely prospective disaster has turned into the real thing. A 1990s primer on population by necessity looks very different from our original work. The Population Explosion is being written as ominous changes in the life-support systems of civilization become more evident daily. lt is being written in a world where hunger is rife and the prospects of famine and plague ever more imminent; a world where U.S. consumption is so profligate that the birth of an average American baby is hundreds of times more of a disaster for Earth's life-support systems than the birth of a baby in a desperately poor nation; and a world in which most people are unaware of the role that overpopulation plays in many of the problems oppressing them. Even people far removed from the pa,ngs of hunger must suspect that something is amiss, must feel a sense of foreboding for their own future well-being and that of their children. Television shots of tropical forests afire, sewage-smeared beaches, and drought-stricken farm fields cause unease. Pictures of starving Africans in desolate relief camps rend the heart. ln the United States, drivers in virtually every large metropolitan area now can encounter gridlock at practically any hour of the day or night. Visitors to our nation' s capital find homeless people sleeping in the park opposite the White House, and drug abuse and crime sprees fill the evening news. News about the AIDS epidemie seems to be everywhere, as is talk of global warming, holes in the atmosphere's ozone layer, and acid rain. These may seem to be isolated problems, but they are ali tied together by common threads-threads that also link them to food-production statistics, to the prospect of a billion or more deaths from starvation and disease, and to the possible dissolution of society as we know it. Chief among the underlying causes of our planet' s unease is the · overgrowth of the human population and its impacts on both ecosystems and human communities. Those impacts are the threads linking ali the seemingly unrelated problems mentioned above, and others besicles. The explosive growth of the human population, its meaning for you and your children and grandchildren, and what you and your friends can do to make a better future are what this book is ali about. PAUL R. EHRLICH. ANNE H. EHRLICH. Rocky M ountain Biological Laboratory Gothie, Colorado. }uly 26, 1989. ...