Solzhenitsyn Alexander - One Day in the Life of Ivan Denisovich 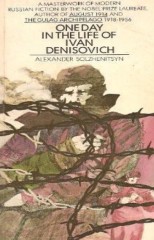 FOREWORD BY ALEXANDER TVARDOVSKY. The raw material of life whilch serves as a basis for A. Solzhenitsyn's story is unusual in Soviet literature. It carries within itself an echo of the painful features In our developmeat related to the cult of personality that has been debunked and repudiated by the Party, features that, although they are not so far away from us in time, nevertheless seem to us to be in the distant past. But the past, no matter what it was like, never becomes a matter of indifference to the present. The assurance of a complete and irrevocable break with everything which beclouds the past lies in a true and courageous comprehension of its full consequences. It was about this that N. S. Khrushchev spoke in his concluding words at the 22nd Congress of the Communist Party of the Soviet Union, words so memorable for all of us: "It is our duty to gain a thorough and comprehensive understanding of the nature of the matters related to the abuse of power. Time will pass and we shall die, we are all mortal, but so long as we work we can and must clear up many points and tell the truth to the Party and to the people. . . . . . This we must do so that such things never happen again." _One Day in the Life of Ivan Denisovich_ is not a document in the sense of being a memoir, nor is it notes or reminiscences of the author's personal experiences, although only such personal experiences could lend this story its sense of genuine authenticity. This is a work of art and it is by virtue of the artistic interpretation of this material from life that it is a witness of special value, a document of an art which up to now had seemed to have few possibilities. The reader will not find in A. Solzhenitsyn's story an allencompassing portrayal of that historic period which is particularly marked by the bitter memory of the year 1937. The content of _One Day_ is naturally limited in time and place of action and the horizons of the main hero of the story. But in the writing of A. Solzhenitsyn, who here enters the literary scene for the first time, one day in the life of the camp prisoner, Ivan Denisovich Shukhov, develops into a picture which gives extraordinary vitality and fidelity to the truthfulness of its human characters. Herein above all lies the uncommon power of the work to impress. The reader can visualize for himself many of the people depicted here in the tragic role of camp inmates in other situations - at the front or at postwar construction sites. They are the same people who by the will of circumstance have been put to severe physical and moral tests under special and extreme conditions. In this story there is no deliberate concentration of terrible facts of the cruelty and arbitrariness that were the result of the violation of Soviet legality. The author chose instead to portray only one of the most ordinary of days in the life at camp from reveille to retreat. Nevertheless this "ordinary" day cannot but arouse in the heart of the reader a bitter feeling of pain for the fate of the people who, from the pages of this story, rise up before us so alive and so near. Yet the unquestionable victory of the artist lies in the fact that the bitterness and the pain have nothing In common with a feeling of hopeless depression. On the contrary, the impression left by this work is so extraordinary in its unvarnished and difficult truth that it somehow frees the soul of the burden of things unsaid that needed to be said and at the same time it strengthens one's manly and lofty feelings. This is a grim story - still another example of the fact that there are no areas or facts of reality that can be excluded from the sphere of the Soviet artist in our days or that are beyond truthful portrayal. Everything depends on the capabilities of the artist himself. This story leads to still another simple and instructive conclusion: the truly significant content, the fidelity to the great truths of life, the profound humanity In the approach to the portrayal of even the most difficult subjects cannot but awaken corresponding virtues in the author's writing. _One Day_ is alive and distinctive in its very everyday ordinariness and outward unassumingness; it is least of all concerned with itself and is therefore full of an inner dignity and force. I do not want to anticipate the evaluation of this work - and so great in size - although for me it is indubitable that it signifies the entrance into our literature of a new, original, and completely mature artist. It is possible that the author's use - a quite moderate and advisable use, by the way - of some words and expressions of the environment in which the hero spends his working day will provoke the objections of fastidious taste. But on the whole _One Day in the Life of Ivan Denisovich_ belongs with those works of literature which, once we have read them, create in us a deep desire to have our feeling of gratitude to the author shared by other readers too. ...