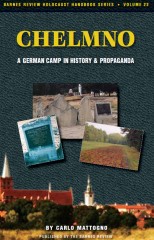 The alleged extermination camp at Chelmno (German: Kulmhof), a town in Poland in the region of Warta, called Warthegau by the Germans during the Second World War, is of major importance in orthodox Holocaust historiography, because it is claimed to be the first “death camp” built to serve the genocidal agenda of which the Germans are accused. Unlike other camps established afterward, it is not said to have been equipped with stationary gas chambers, but with “Gaswagen” (gas vehicles), mobile gassing trucks which allegedly used engine exhaust gas to kill human beings. The camp is said to have operated, with occasional periods of inactivity, in two phases: from 8 December 1941 – the day it opened – to 7 April 1943, and again from April 1944 to January 1945, killing a total of 152,000 to 340,000 people (Jäckel et al., vol. I, p. 280; see chapter 11). Documentation about it is almost nonexistent, which is why the picture outlined by orthodox Holocaust historiography is based almost exclusively on court records, which is to say, it is in practice based on testimony. But even these data are rather limited: they have only permitted the preparation of the odd leaflet by some Polish historians and a few articles by Western historians. As Israeli historian Shmuel Krakowski, who is currently the world’s leading Holocaust expert of the orthodox persuasion, wrote (Krakowski 1995, p. 55): “Research on the extermination camp at Chelmno upon Ner occupies a very small place in Holocaust historiography.” His 2007 study of this camp, despite its stated intention to “expand the state of knowledge” and to “try to complete what has not been taken into account in the existing literature” (Krakowski 2007, p. 10) actually reflects the total historical-documentary inconsistency of the orthodox Holocaust historiography about Chelmno. He reaffirms, among other things, that “sources on the Chelmno camp are extremely few, hence the insignificant number of publications on the topic” (ibid., p. 11). In the revisionist school, the most important historiographic contribution is the 2003 article by Ingrid Weckert “What Was Kulmhof/Chelmno?” These studies have inevitably left many gray areas, and the history of the Chelmno camp is still in many aspects enigmatic. One of the most important issues, raised in 1999 by Bertrand Perz and Thomas Sandkühler, concerns the relationship between Chelmno and “Aktion Reinhardt,” but even more important is the relationship between the “field ovens” of Chelmno and cremation at Auschwitz (see Mattogno 2008). The existence of “gas vans” during the Second World War is very controversial and is disputed by Revisionist scholars (see Marais 1994; Weckert 2003; Alvarez 2011). However, the interpretation of documents relating to the alleged “gas vans” (called Sonderwagen, Sonderfahrzeuge, and Spezialwagen) is not the direct object of this study, which restricts the scope of its investigation to determining whether such vehicles might have actually been used for the purpose of extermination at Chelmno. Yet even in this limited scope, it is important to initially examine the decision-making process and technical development that would be required to lead to the construction of the “gas vans.” ...