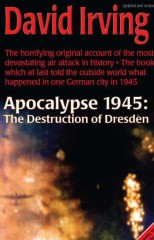 Author : Irving David
Title : Apocalypse 1945 The Destruction of Dresden The horrifying original account of the most devasting air attack in history. The book which at last told the outside world what happened in one German city in 1945
Year : 1963

David Irving is the son of a Royal Navy commander, John Irving (author of Coronel & the Falklands, The King’s Britannia, Royal Navalese, The Smokescreen of Jutland and other works). Educated at the Imperial College of Science & Technology and at University College London, he subsequently worked in Germany in a steel mill to perfect his fluency in the language. Among his thirty books the best-known include Hitler’s War; The Trail of the Fox: The Life of Field-Marshal Rommel; Accident, the Death of General Sikorski; The Rise and Fall of the Luftwaffe, and Göring: a Biography. He has also translated several books by other authors. He lives in Mayfair, London, and is the father of five daughters. In 1963 he published his first English language book, The Destruction of Dresden. Translated and published around the world, it became a best-seller in many countries. The present volume, Apocalypse 1945, revises and updates that work on the basis of information which has become available since 1963. ...