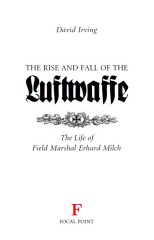 Author : Irving David
Title : The Rise and Fall of the Luftwaffe The Life of Field Marshal Erhard Milch
Year : 1973

Of the story or more field marshals created by Hitler three, and one grandadmiral, are still alive. Most of the others were killed in action, committed suicide, or were hanged by Hitler or their captors. To have written a biography of Milch, least famous of the survivors, requires some explanation. When I visited them, most of his contemporaries were surprised to learn that he was still alive. In the last years of his life he closeted himself behind an anonymous front door in suburban Düsseldorf, looked after by a niece, writing reports for a foreign aviation company of international repute. I was intrigued by the man when I first met him five years ago. Erhard Milch, Hermann Göring’s deputy - his benefactor in time of poverty, his adversary in time of influence, his defender in time of trial - proved to be the repository of a thousand anecdotes of the war and its slow prelude. He was the senior of the surviving field marshals, and the highest-ranking of the surviving Luftwaffe officers. The Luftwaffe was a force which he, more than any other German, created. But more than that: the dapper, florid businessman sitting upright in the stiff armchair next to me, preparing to narrate the three score years and ten of his life so far, had already created for himself a niche in history, quite outside the world of politics, by the time Adolf Hitler first entered the Reich Chancery in 1933. It was Milch whose administrative cunning and personal dynamism fashioned the German Lufthansa airline from its beginnings in local companies into an international concern, while at the same time secretly providing and nourishing the industrial roots from which a future Luftwaffe would spring. This much is known. And yet the real story starts even earlier. During the First World War, Milch is to be seen with his hand camera, photographing Allied trenches from a German biplane; and if the wheel of time is allowed to spin, we catch a fleeting glimpse of the ex-Captain Milch, now commanding officer of a police air squadron in East Prussia, ordering a machine-gun to be turned on rioting strikers in Königsberg. He describes it as though it were yesterday. ...