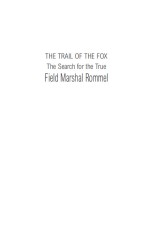 Author : Irving David
Title : The Trail of the Fox The Search for the True Field Marshal Rommel
Year : 1977

What will history say in passing its verdict on me? If I am successful here, then everybody else will claim all the glory. . . But if I fail, then everybody will be after my blood. From the unpublished Rommel diary, April 16, 1977. it is may 18, 1944. At Hitler’s war conference he is told that the enemy has carried out two spy operations during the night on the heavily defended French coastline. At one place, near Calais, German troops have found shovels and a flashlight lying on the beach after a shoot-out. At another, in the estuary of the river Somme, two British officers have been captured. “They came ashore by rubber dinghy,” General Alfred Jodl, chief of Wehrmacht operations, tells Hitler. “Their interrogations so far have revealed that they were set down by a British motor launch.” The scene changes to a French château built against a steep rock face overlooking the Seine valley. It is two days later. A small German army staff car swerves into the driveway to the château and comes to a halt. Two soldiers climb out, stiff from their 150-mile drive from the coast of the English Channel. They lead two other men, blindfolded and handcuffed, from the car. These two men wear no insignia, but the empty stitching on their khaki battle dress shows all too clearly where the purple Combined Operations badge and the narrow Special Service shoulder flash have been removed; they are British commandos. Their blindfolds are untied, and they blink in the sunlight. Their expressions are grim; they know that Hitler has given standing orders that all commandos are to be turned over to the Gestapo and shot. ...