« Jews Control U.S.A., Therefore the World – Is That - Top 7 Myths About Israel and Zionism »

Porter Carlos Whitlock - Made in Russia - The Holocaust 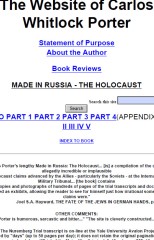 Adolf Hitler said that people will doubt the truth of a small lie, but never a big one. He went on to say that the first and foremost practitioners of this technique have always been the Jews. Of course, this part of the quotation is forgotten - deliberately amputated (but always with plenty of anaesthesia). Proof of the truth of this contention, including the last four words, is that the so-called Holocaust itself is not only the biggest "Big Lie" in history, but probably the stupidest as well. One might just as well say that people will doubt the truth of an intelligent lie, but never a stupid one - and the stupider the better. For example: if you tell your wife that you're working late at the office instead of drinking with your friends (or worse), she'll know it's a lie. But if you tell her that Adolf Eichmann witnessed "blood spurting in little geysers from a mass grave" (Christopher Browning, FATEFUL MONTHS, Essays on the Emergence of the Final Solution, Holmes &amp; Meyer, NY, 1985, p. 24), she'll probably believe it. What's more, if you tell her it's all a load of crap and that geysers are caused by volcanic heat turning water to steam in rock: what could cause a geyser of blood in a mass grave? -- she'll probably get indignant. "Cruel monster! Heartless beast! " The Holocaust is a universe of lies. It used to be thought that the Big-Lie of the Holocaust lie-universe was only SIX MILLION lie-years across. But with improved research technology, scientists now believe it to be infinitely larger, with Six Million hitherto unknown Holocaust lie-galaxies being discovered on an almost daily basis. ...

« Jews Control U.S.A., Therefore the World – Is That - Top 7 Myths About Israel and Zionism »