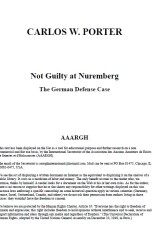 Introduction. Dedicated to Barbara Kulaszka and Dan Gannon. The re-writing of history is as old as history itself. The Annals of Tacitus, for example, (xv 38), mentions a "rumor" that Nero burned Rome; this "rumor" was repeated by later Roman historians as "fact" (Suetonius, Nero, 38; Dio Cassius, Epistulae, lxii 16; Pliny, Naturalis Historia xvii 5). ...