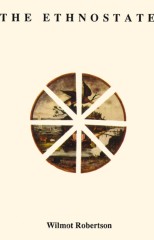 In an earlier book, The Dispossessed Majority, the author was hopeful, but not too hopeful, that a sharp white backlash to minority racism and cultural degeneration might save what appeared to be the doomed United States. Twenty years ago he still believed it possible that his moribund country could revive, clean out its political and cultural Augean Stables, and establish a Pax Americana that would herald a new age of peace, plenty and progress. Now that more than two decades have passed, events are proving that America, as we have known it, is beyond saving. The Majority, that is, the Northern and Western European elements of the population, has lost whatever chance it had to recapture the country it ruled for more than two centuries. Defeatist as lit may sound, this does not mean it is too late to save the Majority as a people. This could be effected by breaking up the United States into small independent regions, established in the areas where most of America's various population groups are concentrated and gathered. The same process of fragmentation and regrouping might save the peoples of Western Europe, who are also in a period of steep social and cultural decline, though by no means to the same extent as the American Majority. What is called for is a new form of goverment that would transform socially destructive into socially constructive forces. Race, now actively tearing countries apart, might be helpful in putting them back together, but this time in the form of autonomous, relatively self-sufficient collectivities that the author has chosen to designate as ethnostates. Since nothing else seems to be working, since every new day brings with it new demographic horrors, a little rethinking of the fundamental themes and axioms of modem statecraft might be in order. Although the author is an American, he will not confine his remarks to what used to be his country, but will aim many of them overseas. Inescapably, however, his emphasis will be on the United States, not only because of his birth and upbringing, but also because what is happening in the Western world in these parlous times is happening first in America. To employ Spengler's term, but without accepting his organic view of history, the Decline of the West is accelerating faster in the United States than elsewhere. Consequently, the suggestions advanced in this book for halting and reversing this decline should have the highest priority for Euro-Americans, the most threatened of all white population groups, South African whites excepted. Europeans and their racial cousins in Canada, Australia and New Zealand have more time and may get out of their rut with less effort, though the chances that their social order will survive the battering of minority racism and decadent liberalism in the long term are not significantly better. ...