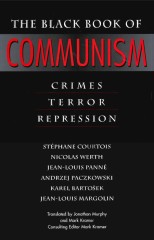 Communism has been the great story of the twentieth century. Bursting into history from the most unlikely corner of Europe amid the trauma of World War 1, in the wake of the cataclysm of 1939-1945 it made a great leap westward to the middle of Germany and an even greater one eastward to the China Seas. With this feat, the apogee of its fortunes, it had come to rule a third of mankind and seemed poised to advance indefinitely. For seven decades it haunted world politics, polarizing opinion between those who saw it as the socialist end of history and those who considered it history's most total tyranny. One might therefore expect that a priority of modern historians would be to explain why Communism's power grew for so long only to collapse like a bouse of cards. Y et surprisingly, more than eighty years after 1917, probing examination of the Big Qy.estions raised by the Marxist-Leninist phenomenon has hardly begun. Can The Black Book of Communism, recently a sensation in France and much of Europe, provide the salutary shock that will make a difference ? Because a serious historiography was precluded in Soviet Russia by the regime's mandatory ideology, scholarly investigation of Communism bas until recently fallen disproportionately to Westerners. And though these outside observers could not entirely escape the ideological magnetic field emanating from their subject, in the half-century after World War II they indeed accomplished an impressive amount. Even so, a basic problem remains: the conceptual poverty of the Western empirical effort. This poverty flows from the premise that Communism can be understood, in an aseptic and value-free mode, as the pure product of social process. Accordingly, researchers have endlessly insisted that the October Revolution was a workers' revoit and not a Party coup d'état, when it was obviously the latter riding piggyback on the former. Besicles, the central issue in Communist history is not the Party's ephemeral worker "base"; it is what the intelligentsia victors of October later did with their permanent coup d'etat, and so far this has scarcely been explored. More exactly, the matter has been obscured by two fantasies holding out the promise of a better Soviet socialism than the one the Bolsheviks actually built. The first is the "Bukharin alternative" to Stalin, a thesis that purports to offer a nonviolent, market road to socialism-that is, Marx's integral socialism, which necessitates the full suppression of private property, profit, and the market. The second fantasy purports to find the impetus behind Stalin's "revolution from above" of 1929-1933 in a "cultural revolution" from below by Party activists and workers against the "bourgeois" specialists dear to Bukharin, a revolution ultimately leading to massive upward mobility from the factory bench. With such fables now consigned to what Trotsky called "the ash heap of history," perhaps a moral, rather than a social, approach to the Communist phenomenon can yield a truer understanding-for the much-investigated Soviet social process claimed victims on a scale that has never aroused a scholarly curiosity at ali proportionate to the magnitude of the disaster. The Black Book offers us the first attempt to determine, overall, the actual magnitude of what occurred, by systematically detailing Leninism's "crimes, terror, and repression" from Russia in 1917 to Afghanistan in 1989. This factual approach puts Communism in what is, after all, its basic human perspective. For it was in truth a "tragedy of planetary dimensions" (in the French publisher's characterization), with a grand total of victims variously estimated by contributors to the volume at between 85 million and lOO million. Either way, the Communist record offers the most colossal case of political carnage in history. And when this fact began to sink in with the French public, an apparently dry academie work became a publishing sensation, the focus of impassioned political and intellectual debate. ...