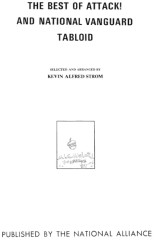 Every book is, in a sense, a time capsule, and this is particularly true of The Best of ATTACK! and NATIONAL VANGUARD Tabloid. If among the readers of this introduction there is an antiquarian of the 25th century, let me address my first paragraph to hi m. You have found a gem! As you study our era, I am sure th at your overall emotional reaction must be one of profound sadness. No doubt you frown when contemplating, for example, the White men who strove mightily to eut clown an ancient forest for the pulp mi ils, so that their daughters might purchase a poster of an androgynous Negro "rock star" and so that every Haitian and Mexican could get his Big Mac properly wrapped. Yes, you must frown often, but in this book you have found reason to smile. For this is not only a book, but a chronicle of an awakening: the awakening of White men and women to their past greatness, to the reality of their race's degradation, and to their responsibility for their future. It is a chronicle of the very beginnings of a movement, the success or failure of which will determine the future course of Life on this planet. So smile, hypothetical antiquarian; smile for us. If our expressions seem grim at times, you will understand why. Every article in this book is reproduced from the originals. Nothing has been edited or reset, except in the case of a few typographical errors or in cases where the fragile newsprint originals were in such poor condition that they were no t legible. Even in such cases, only the affected portions were reset. This necessarily entails that the typography of the original tabloïds, with ail its weaknesses - and all its strengths, such as its sense of immediacy - will be reproduced exactly. l have arranged the articles "newspaper style" to maintain the look and fee] of the originals as much as possible. Short items, letters to the editor, and cartoons are included as fi lier where necessary, and are al ways taken from issues contemporary with the adjacent major articles. With a few exceptions due to space constraints , the articles are in chronological arder. The individual pieces that make up The Best of ATT ACK! and NATIONAL VANGUARD Tabla id cover a broad spectrum of topics, including history, philosophy, poetry, humor, science, politics - virtually everything that migh t be of interest to a racially conscious persan or that might have a bearing on the future of our people. They were, however , selected with a single goal in mind: to preserve for posterity and expose to a wider audience th ose articles with a lasting value which were published in the "tabloid years," before the present NATIONAL VANGUARD magazine came into being. ln reading this book you will notice, as I did in reading the original tabloïds, an evolution in style, in attitude, and in language as you progress from the earlier issues toward the more recent ones. Change is an inevitable and necessary consequence of growth. Underlying the evolution of the National Alliance is the bedrock of an uncompromising world view. And beyond shines a fixed star, the unchanging point toward which ali our growth and evolution are dire cted: the survival and advancement of our race. One finaL persona! note: it has taken nearly one year of my li fe to compile and prepare this book for publication. Du ring the course of th at year I lost someone very de ar to me. I wrote her a poem once, the last four lines of which seem to express not only how I felt about a dream now gone fo rever, but how l feel about our dream, the dream embodied in the pages which follow: the dream of a White America. Now may these /ines become as seed, To be sown in her, sa as she reads, She shou ld know these things because Of all this dreaming, she's the cause. K.A.S. ...