Hislop Alexander - The Proverbs of Scotland 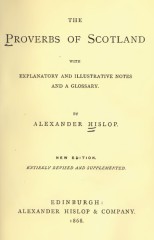 Author : Hislop Alexander
Title : The Proverbs of Scotland with explanatory and illustrative notes, and a glossary.
Year : 1868

The gathering together of the Proverbs of Scotland has occupied the attention of several collectors. The earliest work on the subject which has been traced is that of Beaton, Archbishop of Glasgow, who, about the time of the Reformation, made a small collection. The definite information which we have of this work is so very slight, however, that it has been of little or no value to subsequent collectors and writers on the subject. The first collection of importance is the well-known one made by the Rev. David Fergusson, minister of Dunfermline, who was a contemporary of Archbishop Beaton. Fergusson's collection, which numbered 940 proverbs, was, all circumstances considered, a very commendable one ; and it has served as a foundation to the labours of subsequent workers in the same field. The next is that of James Kelly, published in London in 1721. This volume contains nearly 3000 proverbs, and is very carefully arranged, with notes and parallel illustrations. ...