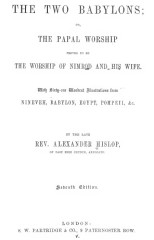 Author : Hislop Alexander
Title : The two Babylons; or, The papal worship proved to be the worship of Nimrod and his wife
Year : 1853

Had the lamented Author been spared to superintend the issue of the Fourth Edition of his work, it is probable he would have felt himself called upon to say something in reference to the political and ecclesiastical events that have occurred since the publication of the last Edition. By the authoritative promulgation of the dogma of the Pope's Infallibility, his argument as to the time of the slaying of the "Witnesses, and his identification of the Roman pontiff as the legitimate successor of Belshazzar have been abundantly confirmed. It is gratifying to the Author's friends to know that the work has been so favourably received hitherto, and that no one, so far as we are aware, has ventured to challenge the accuracy of the historical proofs adduced in support of the startling announcement on the title page. But it is deplorable to think that, notwithstanding all the revelations made from time to time of the true character and origin of Popery, Ritualism still makes progress in the Churches, and that men of the highest influence in the State are so infatuated as to seek to strengthen their political position by giving countenance to a system of idolatry. If Britons would preserve their freedom and their pre-eminence among the nations, they should never forget the Divine declaration, " Them that honour Me I will honour, and they that despise Me shall be lightly esteemed." It only remains for the Editor to say that the work has been carefully revised throughout, and a few trifling errors in the references have, in consequence, been corrected. One or two notes also, enclosed in brackets, have been added, and the Index has been somewhat extended. R. H. Blair Bank, Polmont Station, N.B., January, 1871. ...