Hoffman II Michael A. - Hate whitey The cinema of defamation 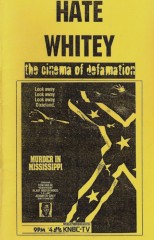 I first became aware of the special genre of hate propaganda which dare not speak its name, when I was a child. I was reading Mad Magazine and one of its cartoons depicted greedy white Southerners exhibiting disapproval of Yankee tourists. The Southerners were drawn with hideous grins and a pile of tourist cash as they announced, "We don't like them Yankees, but we sure do like them Yunkee dollars." I was shocked even then by the appearance of this brazen, hateful stereotype of white Southern people. The Media Establishment has created a special category of ethnie and religious stereotyping that is exempt from censure. ...