Decourdemanche Jean-Adolphe - The Conquest of the World by the Jews 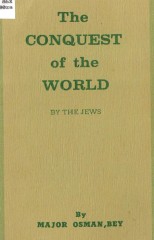 Written before the Protocols of the Learned Elders of Zion, this essay by Major Osman Bey constitutes yet another proof that there were men before the 20th century who knew about the Jews and their penchant for getting control of other peoples by indirect means. In obedience to an unchangeable law of nature, men strive to ameliorate their own condition at the expense of others. From this fact originated the many jealous contests and wars wherein men seek to excel each other. The manner in which these wars and contests are conducted is determined by principles that differ from each other according to the geographical position, the social and political condition, and the spirit peculiar to the contesting people. These principles that thus form the basis of the work of conquest are of three kinds: 1. The Principle of Physical Force 2. The Theocratic Principle, whereby the masses are subjected to a religious faith. 3. The Principle of Material Interests, which enslaves people by financial oppression. The first two kinds of principles we assume to be well-known, for the history of Rome and Greece in ancient times, as well as the history of the Papacy and of Russia and Germany in modern times, is simply the illustration of the application of those principles. They are the causes that give rise to those Powers and founded their predominance by physical and moral means. But the conquests of the third category, that is, those which result from the application of the principle of material intersts, show us a peculiar and altogether novel phenomenon. In this case material interests take the place of physical force, or religious faith, and become the basis as well as the moving springs of the work of conquest. But the principle of material interests is in itself much more powerful than the other principles, as matters are arranged in this world now, no one being able to escape from its power. For a principle, which is based on the necessity of existence, on the element of life, is a universal principle to which we are all subject at present. Our material interests form a central point toward which all human inclinations and desires tend; and hence their possession is equivalent to universal dominion. A conquest founded on the principle of material interests is not a victory of strength over weakness, nor a victory of knowledge over ignorance, but a victory of cunning over confidence and carelessness. Its endeavor is to obtain control of all the means of existence, and absorb all the wealth of nations; thereby subjecting them, in the end, to the arbitrary rule of the conqueror. It is our purpose in this essay to explain the mode and manner of this conquest, and to expose clearly and strikingly the rise of the Jewish power, and its wonderful development in our days. The Jewish people has, in all probability, been the first one to discover that secret power—the principle of material interests. At any rate, this people is the only one which has understood how to utilize that principle as a means of conquest. If we examine history closely, we are struck by the fact that the Jews have, from the earliest times, used this principle as a weapon wherewith to fight other people, and as a basis for the erection of their religious, social and political structure. An attentive study of Jewish history enables us to become acquainted with the spirit and character of the Jewish people, and properly to appreciate its endeavors and purposes. Unfortunately, in following this study we are left exclusively to the documents and reports which the Jews themselves have seen fit to transmit to us. If the Philistines, the Pharaohs and the other opponents of the Jews had left us historical memorials, the history of the "chosen people" would sound quite differently from what we read it today. But a philosophical analysis of the Old Testament will, after all, be amply sufficient to give us a correct estimation of the achievements of the Jewish people. ...