Diky Andrey Iv. - Jews in Russia and in the USSR 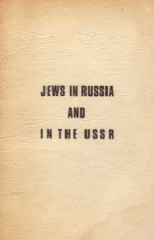