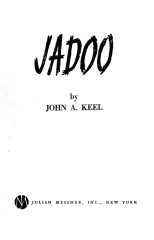 Blood rained over Hangchow, China, early one evening in the fourteenth century. And with the blood dismembered hands, legs, and arms came plummeting out of the sallow sky into the beautiful gardens of the Great Khan. It was a festival time and the golden domes and turrets of the Khan's palace were masked with light and shaking with the echo of laughter, music and firecrackers. Swarms of nobles, notables and fierce chieftains from outlying districts strolled through the corridors and courtyards, stopping to watch ragged fire-eaters, jugglers and dancers going through their paces. The blood went almost unnoticed until a dark, rawly severed head dropped down and rolled to a stop at the feet of one of the Khan's honored guests, the famous traveler Sheikh Abu Abdullah Mohammed, a bushily bearded man with a slight twinkle of mischief in his dark Arab eyes. In his native Tangiers he was a man of wealth and affluence though he didn't amount to much as an historical figure. In fact, history might have forgotten him altogether if he hadn't wandered away from North Africa early in the fourteenth century to explore the then little known regions to the east of the Red Sea. ...