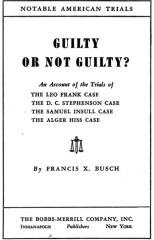 Author : Busch Francis X.
Title : Guilty or Not Guilty ? An Accouont of the Trials of The Leo Frank case The D. C. Stephenson case The Samuel Insull case The Alger Hiss Case
Year : 1952

THE out-of-the-ordinary criminal case enlists universal interest because it is usually a threefold drama: the crime; the identification, apprehension and accusation of the suspect; and the trial and its consequence. But the public interest in the trial of a defendant for a shocking crime has something in it far more significant than the high drama usually involved. Courts are established and their procedures regulated by basic constitutions or by the executive or legislative branch-whichever happens to be dominant-of the government. The administration of criminal law necessarily mirrors the government of which it is a part. Crime itself through the ages has changed little or not at ali, but the attitudes of particular societies toward persons accused of crime and the methods of dealing with such persons have changed, even in our own time, and are constantly changing. It has, therefore, been said with truth that the degree to which the ordinary citizens of a commonwealth are sensitive to wrongdoing and the degree to which, by their institutions and practices, justice is arrived at is a just measure of the civilization of that commonwealth. Trial by jury of persons defending against accusations of crime is essentially an Anglo-Saxon institution. The thirteen American colonies adopted it as their own cornmon law. One of the complaints in the long list of grievances against the English crown contained in the Declaration of Independence was the deprivation of what the colonists had come to regard as the sacred right of trial by jury. Today, after eight centuries of testing and despite occasional miscarriages of justice, it remains the most perfect instrument yet devised for the protection of the inalienable individual rights of life, liberty and property. Americans and Englishmen alike generally subscribe to the oft-quoted eulogium of Blackstone: The founders of the English laws have with excellent forecast, contrived that no man should be called to answer to the King for any capital crime, unless upon the preparatory accusation of twelve or more of his fellow subjects, the grand jury: and that the truth of every accusation, whether preferred in the shape of indictment, information, or appeal should afterwards be confirmed by the unanimous suffrage of twelve of his equals and neighbors, indifferently chosen, and superior to ali suspicion. The four American criminal jury trials presented in the succeeding pages have been selected not only because their dramatic quality attracted nationwide attention, or because they were major forensic battles in which great advocates displayed their skills and wits. In each of these trials the scene is laid against a background peculiar to American life, and each trial possesses a special social significance. Taken together, the trials described in this book can be said to typify the administration of criminal justice in the United States of America. The plan followed in the work has been inHuenced to an extent by that most excellent series of seventy-five volumes of Notable BTitish TTials (William Hodge & Company, Ltd., London, Edinburgh and Glasgow). Each volume of that series is devoted to a single case. An "introduction," which briefly describes the crime and the suspected criminal, is followed by a verbatim transcript or full abstract of the trial proceedings-the opening statements, the evidence, the summations, the Court's charge and the verdict. Because of their resulting technical character, the appeal of Notable British Trials is largely to the legal profession. In the cases treated in this work, an introduction on the English pattern is followed by a nontechnical condensation of the court proceedings and their consequences. The resuit is a fairly brief but accurate account of four notable American trials, specially designed for the general reading public. The accounts of the four trials which follow are based either on the stenographie trial record or the printed appeal record in the particular case. My acknowledgments are due to the clerks of the courts and other officiais and librarians in public and private libraries and newspaper offices in Chicago, Atlanta, Washington, New York and Indianapolis for courtesies extended in making records available; to Mrs. Marian A. Hodgkinson and Mrs. Virginia Weissman and my daughter, Mrs. Frances Busch Zink, for library research, copying, comparing and proofreading manuscript; and to my wife for her valuable suggestions, encouragement and inexhaustible patience. FRANCIS X. Busch. ...