Thiers Adolphe - The history of the French revolution 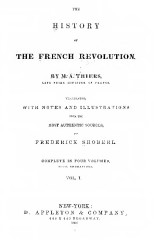 Of all the native historians —and their name is Legion— who have written on the subject of the French Revolution, the two most distinguished are decidedly Messrs. Thiers and Mignet. Both these eminent men are remarkable for the impartial tone of their narratives, considering how recent are the stirring events of which thej treat; for the accuracy of their details; for the skill with which they compare and sift conflicting evidence, and the general justness of their conclusions; and for the luminous and succinct manner in which they trace, step by step, the progress of the most awful moral convulsion that the world has yet known. They do not mix themselves up with the strife, or take part in the feverish emotions of the chief combatants, but stand aloof, as shrewd and cool lookers-on. They enlist neither under the banner of the Gironde nor of the Mountain; they swear neither by the sovereignty of Louis, nor by that of the People; they are neither Orleanists, nor Septembrizers, nor Terrorists; but act upon the broad, enduring principle of giving fair play to all parties. ...