Thiers Adolphe - The rights of property 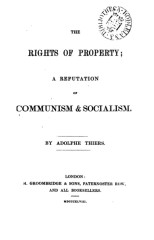 The following treatise, intended to refute the dangerous doctrines entertained by a large class of Frenchmen, bas recently appeared in the columns of the Constitutionnel; and as such doctrines are not without their advocates and supporters in our country, it is hoped that this endeavour to present M. Thiers' able work in an English dress, will not be unacceptable to those who may be desirons of gaining information relative to the new movement against Society. Much has been heard of Communism, Socialism, and the Right to Labour, but few, perhaps, are familiar with the meaning of the words. Happily for us their advocates are ignorant and obscure; yet, as suffering is credulous, they find listeners, whose numbers according to the testimony of all parties, are rapidly increasing. Such will ever be the case in times of distress : the drowniog man catches at a straw; the starving mechanic is ready for any scheme that promises not only to alleviate but to remove his evils for ever. Fourier, George Sand (Madame Dudévant), Louis Blanc, Cabet, Proudhon, and Considérant are the chief apostles of the new movement: their theories may differ, but their object is the same, " to suppress the miseries of the people." A most desirable object, and one which should be uppermost in the miod of every statesman and philanthropist; but the followiog pages will show to what the schemes of the new school, if carried out, would inevitably lead. ...