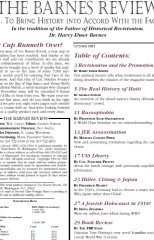 3 Revisionism and the Promotion of Peace BY HARRY ELMER BARNES Our spiritual mentor tells what revisionism is all about and in so doing describes the mission of the magazine named after him. 5 The Real History of Haiti BY GEORGE FOWLER An overview of the island nation’s history debunks the “restore democracy” crowd. 11 Russophobia BY PROFESSOR IGOR SHAFAREVICH A World Class historian on our misunderstanding of Russia. 13 JFK Assassination BY MICHAEL COLLINS PIPER New and penetrating revelations regarding the case that never closes. 17 USS Liberty BY COL. FLETCHER PROUTY About the Israeli outrage; with previously unpublished information. 23 Hitler, Chiang & Japan BY FREDERICK BLAHUT In the 1930’s, Germany had to choose a major Asian ally. Why Japan rather than China? 27 A Jewish Holocaust in 1918? BY IRENA ZDIARSKA Were six million Jews killed during WWI? 29 Book Review BY THE TBR STAFF Historian Tom Fleming’s new novel Loyalties touches crucial World War II events. 31 On the Uses of History BY WILLIS A. CARTO How is history used, misused and abused? ...