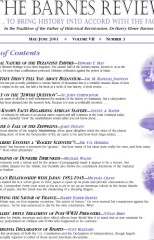 5 THE DUAL NATURE OF THE BYZANTINE EMPIRE—EDWARD T. MAY A key part of our Western heritage is too often forgotten: The eastern half of the Roman empire, known to us as the Byzantine empire, for more than a millennium protected Christian civilization against the power of Islam. . . . 11WHAT THEY DIDN’T TELL YOU ABOUT BYZANTIUM—DR. M. RAPHAEL JOHNSON John Julius Norwich has just recently published a concise history of Byzantium that is a veritable treasure house of facts about the Roman empire in the east, but falls a bit short as a work of true history. A book review. . . . 17 HOMILY ON THE “JEWISH QUESTION”—ST. JOHN CHRYSOSTOM One of the greatest saints of all time is well remembered by students of the history of Christianity. But a vital portion of his teachings has been dumped into the memory hole, because it is seen as politically incorrect. . . . 23 LITTLE-KNOWN FACTS REGARDING AFRICAN SLAVERY—STEVEN A. RAPER The enslavement of Africans by Africans is an ancient native custom and still continues in the Dark Continent today. Here is a look at some shameful “roots” the establishment would rather you not know about. . . . 29 THE RISE & FALL OF THE ZEPPELINS—JOHN TIFFANY Until the mysterious demise of the mighty Hindenburg, these giant dirigibles ruled the skies of the planet. Here is the exciting story of how the behemoths of the air came to be and how their reign ended. . . . 35 WAS ALBERT EINSTEIN A “ROCKET SCIENTIST”?—DR. V.S. HERRELL The name “Einstein” has become a synonym for “genius.” But how many of his ideas were really his own, and how many did he “borrow” from other physicists? . . . 41 THE LEGEND OF DUNKIRK DEBUNKED—MICHAEL WALSH The British government took a retreat and by the power of propaganda made it appear to be a victory. Not only was it a horrible disaster for the British, but Dunkirk also shows the conciliatory intentions of the National Socialist German leaders. . . . 45 AMERICA’S RELATIONSHIP WITH JAPAN: 1853-1945—MICHAEL CRANE America used a mailed fist in a velvet glove to force Japan to open up its ports and provide concessions to the U.S. government. Commodore Perry even went so far as to try to set up an American colony in the Bonin Islands just off the coast of Japan. But the result was the awakening of a sleeping dragon. . . . 51 CRUCIFYING THE SAVIOR OF FRANCE—HARRY ELMER BARNES Marshal Henri Pétain was, on four separate occasions, “the savior of France.” He even warned his countrymen against the Nazi German menace. Yet he was sentenced to die by his own countrymen. Why? . . . 61 THE ALLIES’ AWFUL TREATMENT OF POST-WWII PRISONERS—VIVIAN BIRD Is it now high time for British, American and other Allied officers from World War II to stand trial as war criminals for the atrocities they perpetrated on civilians and POWs who happened to be German? . . . 65 THE VIRGINIA DECLARATION OF RIGHTS—TONY BLIZZARD In many ways, this prototype of both the U.S. Constitution and the Declaration of Independence, though largely forgotten, was actually superior to either of those sacred American documents. . . . 67 THE SAGA OF THE SPIRIT POND RUNE STONES—JOHN CHAPMAN For decades, four small stones found in coastal Maine and inscribed mysteriously with Viking runes and Keltic ogam writing baffled scholars. Now at last they have been translated from the Old Icelandic, and tell a tragic and romantic tale of early Christian explorers from the Old World, nearly 1,000 years ago. . . . ...