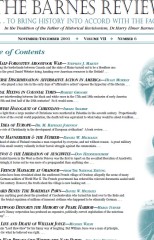 5 THE HALF-FORGOTTEN AROOSTOOK WAR—STEPHEN J. MARTIN This war along the borderlands between Canada and the state of Maine turned out to be a bloodless one. But what was the great DanielWebster doing, handing over American resources to the British? . . . 11REVERSE DISCRIMINATION: AFFIRMATIVE ACTION IN AMERICA—HUGH MURRAY A white man who played a key role in the early days of “affirmative action” exposes the hypocrisy of the liberals. . . . 19 RACIAL MIXING IN COLONIAL TIMES—ROBERT GROOMS Was there more interbreeding between the black and white races in the 17th and 18th centuries of early America than in the 19th and first half of the 20th centuries? So it would seem. . . . 23 A JEWISH HOLOCAUST OF CHRISTIANS—ISRAEL SHAMIR It has come to light that a large number of Christians were murdered in Palestine in the seventh century. Proportionally speaking, in view of the overall world population, the death toll was equivalent to what today would be about 6 million. . . . 27 THE IDEA OF EUROPE—DR. M. RAPHAEL JOHNSON What was the role of Christianity in the development of European civilization? A book review. . . . 33 COUNT MANNERHEIM & THE FÜHRER—DANIEL W. MICHAELS This former head of state of Finland remains a man respected by everyone, and not without reason. A great military leader, he led his small country valiantly in their heroic struggle against the communists. . . . 39 POLEVOY & THE LIBERATION OF AUSCHWITZ—DON HEDDESHEIMER A Soviet journalist known in theWest as Boris Polevoy was the first to report on the so-called liberation of Auschwitz. Not too surprisingly, it turns out he was more of a propagandist than anything else. . . . 44 THE FRENCH MASSACRE AT ORADOUR—FROM THE NATIONAL ZEITUNG Many wild stories have been circulated about the southwest French village of Oradour, allegedly the scene of many atrocities by German soldiers ofWorldWar II. The French government has ordered the relevant documents sealed until far into the 21st century. However, the truth about the village is now leaking out. . . . 47 EDUARD BENES: THE BOHEMIAN PAWN—DANIEL W. MICHAELS It is hard to say anything good about the president of Czechoslovakia who turned his land over to the Reds and who oversaw the brutal expulsion of millions of innocent civilians who happened to be ethnically German. . . . 53 HOLLYWOOD DISTORTS THE MEMORY OF PEARL HARBOR—MARGO TURNER Michael Eisner’s Disney corporation has produced an expensive, politically correct exploitation of the notorious “Day of Infamy.” . . . 59 THE LIFE AND DEATH OF WILLIAM JOYCE—MICHAEL WALSH They called him “Lord Haw-Haw” for his funny way of laughing. ButWilliam Joyce was a man of principle, willing to die for what he believed was right. . . . 67 CIVIL WAR BREAKS OUT WITHIN THE NAZI PARTY—GEN. LEON DEGRELLE In 1933, Adolf Hitler found it necessary to move brutally against the radical wing of the National Socialist Party. . . . 71 YEAR 2001 TBR INDEX. ...