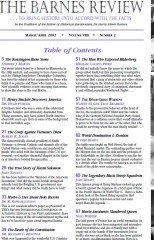 5 The Kensington Rune Stone STEPHEN J. MARTIN The stone tablet found by a farmer in Minnesota in the 19th century, and seeming to have runes carved on it by Vikings long before Christopher Columbus, has been the subject of hot arguments by those who think it is genuine and those who claim it is a hoax. New scientific evidence is now emerging that seems to show the stone is the real McCoy. . . . 11 Henry Sinclair Discovers America DR. HUGH PURCELL A Norman Scot who was a scion of the celebrated Knights Templar, and ultimately descended from Viking ancestors, may have visited North America about 600 years ago. Here is some of the background to that incredible saga. . . . 21 The Coup Against Vietnam’s Diem ROBERT K. LOGAN The democratically elected president of South Vietnam—a fervent Catholic and staunch ally of the United States—was overthrown and murdered by people who acted with the blessings of the U.S. government— yet another shameful chapter in the history of America’s twisted foreign policy. . . . 29 The True Story of Haym Salomon JOHN TIFFANY He has been hailed as the “financier of the American Revolution.” But did the noted Jewish immigrant actually lend the fledgling U.S. government anything? And what money did he really have to lend? 33 Myths & Lies About Holy Russia DR. M. RAPHAEL JOHNSON This is our associate editor’s paper as presented at TBR’S SECOND INTERNATIONAL CONFERENCE ON AUTHENTIC HISTORY & THE FIRST AMENDMENT. Here he corrects many of the old establishment myths and lies we’ve heard for years about imperial Russia. . . . 39 The Death of the Constitution DR. RICHARD C. BENTINCK What ever happened to the wonderful U.S. Constitu - tion given to us by the Founding Fathers? How has the United States Supreme Court been involved in its assassination? An analysis of the death of freedom in modern-day America. . . . 51 The Man Who Exposed Bilderberg MICHAEL COLLINS PIPER He did not initially know the name by which the group called itself, but this pioneering investigative reporter knew that something fishy was afoot when he learned that a gang of plutocrats and other elitists were gathering in the strictest secrecy. Here’s the previously suppressed story of outspoken, charismatic and vilified journalist Westbrook Pegler. . . . 57 THE RÖHM CRISIS WORSENS WAFFEN SS GEN. LEON DEGRELLE Thanks to the provocative behavior of the head of the SA, the moderate Adolf Hitler and the radical wing of the German National Socialist Party found themselves on a collision course that would ultimately prove to be fatal for one side or the other. But who would be surviving when the dust finally settled? . . . 62 World Domination & Zionism BY FRED BLAHUT The battle was fought on Wall Street, the hub of global financial capital. The contending parties were the Morgan clan on the one side and the protegés of the Rothschilds on the other. Needless to say, the former lost the war as finance became almost exclusively a Jewish affair. The results for America, as well as much of the globe, were catastrophic. . . . 65 The Legendary Black Sheep Squadron JOHN TIFFANY This famous group of flying Marines racked up quite a record against the Japanese in a brief span of time in the Pacific theater in World War II. Here’s a factual look back at the famed flying squadron that spawned a popular television series and some larger-than-life legends. . . . 67 Marie Antoinette: Slandered Queen NESTA WEBSTER The last queen of France has an awful reputation (in part because she has been misquoted and misunderstood for centuries) and she certainly met with a tragic end at the hands of the executioner, but in reality she was not as black as she has been painted by so many one-dimensional historians. Here is a contrarian piece on the real Marie Antoinette from one of the greatest literary and political minds of any era—and an expert on the French Revolution—the great Nesta Webster. . . . ...