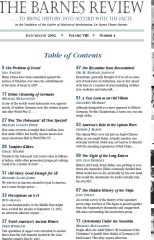 5 The Problem of Israel ISSA NAKLEH Many crimes have been committed against the natives of Palestine ever since the establishment of the state of Israel in 1947. . . . 17 Ethnic Cleansing of Germans MICHAEL MCLAUGHLIN In one of the world’s worst holocausts ever, approximately 20 million Germans were the victims of genocide after World War II. . . . 27 Was ‘The Holocaust’ All That Special? MICHAEL COLLINS PIPER How come everyone is taught that 6 million Jews died under Hitler, but hardly anyone knows how many Americans died in World War II? . . . 29 Vampire Killers ISRAEL SHAMIR Thanks to the holocaust cult, Israel rakes in billions of dollars, while other persecuted groups get nothing. Could it be a matter of clout? . . . 31 Old Glory: Good Enough for All RICHARD LLOYD JAMES We who live in America should be loyal to America, not to some foreign power. . . . 33 Perceptions on 9-11 RUSS GRANATA An even-handed policy in the Middle East might have averted the attacks of September 11, 2001, an American educator argues. . . . 37 North America’s Ancient Miners FRED RYDHOLM Vast quantities of copper were extracted in ancient times from the rich depos its located in the Lake Superior country. But by who? . . . 47 The Byzantine State Reexamined DR. M. RAPHAEL JOHNSON Byzantium, generally thought of (if at all) as some sort of backwater of civilization, was in fact ahead of its time in a number of areas including architecture, medicine and statecraft. . . . 51 A New Look at an Old Villain GEOFFREY MUIRDEN Although denigrated as a mere appeaser to Hitler’s Germany, Neville Chamber lain, it turns out, was one tough cookie. . . . 53 America’s Role in the Opium Wars STEPHEN J. MARTIN The Opium Wars were not just an Anglo-Chinese affair, as you might think. Actually America was seriously involved, which may yet lead us to disaster with the emerging superpower of Red China. . . . 58 The Night of the Long Knives GEN. LEON DEGRELLE Hitler’s old friend, Ernst Röhm, was plotting to overthrow the chancellor. Hitler eventually decided that Röhm would have to die, preferably by his own hand. But would the charismatic SA leader actually take his own life? . . . 67 The Hidden History of the Ninja JOHN TIFFANY An overall survey of the history of the legendary secret ninja warriors of Old Japan is pieced together from the fragmentary documents and exaggerated folk tales surrounding this mysterious group. . . . 71 Christianity Under the Swastika MICHAEL MCLAUGHLIN People often cite Adolf Hitler’s “ill treatment of the Christians” to justify their dislike of Germany’s illfated leader. This story argues otherwise. . . . ...