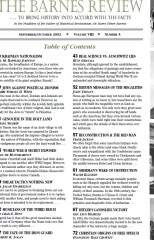 5 UKRAINIAN NATIONALISM DR. M. RAPHAEL JOHNSON Ukraine, the breadbasket of Europe, is a nation much overlooked by Americans, even those who are interested in eastern Europe. Is this a land whose time has come? Or is it destined forever to be a mere satellite of its giant neighbor, Russia? . . . 17 JEWS AGAINST POLITICAL ZIONISM RABBI YISROEL D. WEISS To the man in the street, Zionism and Judaism are concepts that tend to be confused. However, an important minority within the Jewish faith upholds the traditional view of their religion, that God is not ready for the Jews to “return” to Palestine. . . . 21 GENOCIDE IN THE HOLY LAND ISRAEL SHAMIR Deir Yassin was the name of an Arab village in old Palestine. But the town was targeted by Zionist thugs, who murdered the hapless villagers to terrorize the natives of Palestine, with the expectation that the indigenous people all over the land would flee. . . . 25 WORLD WAR II SECRET EXPOSED ALEC DE MONTMORENCY Winston Churchill and Adolf Hitler had little desire to speak to one another after WWII began. However, one Revisionist author says they did meet, in secret, over a mutual concern: Franklin Delano Roosevelt’s longtime desire to annex Canada. . . . 29 SMEAR TACTICS NOTHING NEW DR. JACOB THORKELSON There can be no purpose to breaking down our constitutional form of government unless it is to replace it with another form, and people need to start asking what form is intended to be its replacement. . . . 32 MUSICIANS OF THE THIRD REICH DR. CRAIG E. DUNN Legend has it that all the great musicians skedaddled out of Germany when the Nazis took over. But the truth is very different. . . . 37 THE FATE OF THE IRON GUARD ROBERT K. LOGAN The Iron Guard was an organization set up in Romania in 1930 for the purpose of defending Christian civilization. But with the king having an alien mistress, the patriots faced opposition. . . . 43 REAL SCIENCE VS. AUSCHWITZ LIES RUSS GRANATA Scientists, although ignored by the establishment, say that the allegations of gassings and mass cremations at the so-called “death camp” of Auschwitz in German-occupied Poland during World War II are unfounded and downright ridiculous. . . . 52 HIDDEN MESSAGES OF THE MEGALITHS JOHN TIFFANY Stone-age European man may not have had any system of writing as we know it, but researchers say the people who built the megaliths were at least as smart as we moderns. Not only were they great navigators who succeeded in discovering far-off lands such as the Americas, but they even devised various codes, which were built right into their constructions and which gave the details of their discoveries over the millennia. . . . 57 RECONSTRUCTION & THE RED MAN FRANK JACKSON We often forget that some American Indians were closely akin to the white (and some black) South - erners and sympathized with the Confederate cause. Thousands of slaves were owned by Chickasaws and other tribesmen. And some tribes were split down the middle between Rebel and Union factions. . . . 61 SHERMAN’S WAKE OF DESTRUCTION WALTER KIAULEHN In ancient times, certain savage nomadic peoples such as the Mongols appalled the civilized world by killing not only men, but the women, children and elderly of their enemies. In the 19th century, the United States, thanks to Ulys ses S. Grant and William Tecumseh Sherman, reverted to this primitive and despicable form of barbar ism. . . . 67 HITLER’S LANDSLIDE VICTORY GEN. LEON DEGRELLE In 1934, the German people made their voice heard. Adolf Hitler was democratically elected to be the new chancellor of the nation by a huge margin. . . . 72 CHRISTIAN ORIGINS OF FREE SPEECH EVANGELIST DALE CROWLEY Old Testament prophets were among the early exem plars of free speech. Later, lawmakers created various bills of rights, putting the right to freedom of speech into black and white . . . . ...