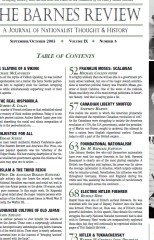 5 THE SLAYING OF A VIKING 35 MICHAEL MCLAUGHLIN Contrary to all the myths of Vidkun Quisling, he was neither morally reprehensible nor a traitor. His fierce Nordic patriotism caused him to regularly snub the German occupying authorities while simultaneously supporting much of their nationalist agenda. . . . 15 THE REAL HISPANIOLA ROBERT K. LOGAN Themassmurder of French civilians on that embattled island caused the country of Haiti endless problems. Today it is one of the globe’s poorest nations. Author Robert Logan goes into great detail describing the racial and ethnic composition of the country in the post-colonial era. . . . 19 INJUSTICE FOR ALL EDGAR STEELE During the most recent Authentic History Conference sponsored by THE BARNES REVIEW and American Free Press, one of the most popular speakers was the “attorney of the damned,” Edgar Steele.His hair-raising description of the violence of the totalitarian government against the citizens of the United States may spur one to action. . . . 27 ISLAM & THE THIRD REICH PROF. DR. ATAULLAH BOGDAN KOPANSKI Every single solitary day, one hears the extent to which German National Socialism was racist and could not wait to destroy every non-Aryan person on the globe. Of course, such prattle is pure nonsense. In this major work, Dr. Kopanski explains in great detail about themajor Islamic persons within the structure of the German armed forces in World War II and, especially, theWaffen SS. . . . 35 ADVANCED CULTURE OF OLD JAPAN JOHN TIFFANY Among the earliest persons to ever inhabit the islands of Japan were the Jomon. These were a surprisingly advanced people who developed many technologies long before humans in the rest of the world did so. Their story is nearly unknown, but is resurrected here in the interest of “bringing ‘ancient’ history into accord with the facts.”. . . 39 INSIDE THE FEDERAL RESERVE DR. TOM ROSE Patriots and nationalists have long discussed the nature, history and function of the Central Bank of the United States nearly since its inception in 1913. It is a fraudulent institution, designed in secrecy in order to control the financial life of the United States. Until this day, there has never been a major public outcry against this scheme. . . . 52 FRANKLIN MOSES: SCALAWAG MICHAEL COLLINS PIPER It is highly unlikely that one will see this in a government primary school textbook, but one of the major Jewish contributions to American political history was Franklin Moses, governor of South Carolina. One of the worst of the radicals, Moses was likely one of the most corrupt politicians in American history. And that is saying quite a bit. . . . 57 CANADIAN LIBERTY SNUFFED STEPHEN MARTIN Few realize the extent to which the American plutocratic elite destroyed the republican Canadian revolution of 1837. As the Canadians were struggling to imitate the American revolution of 1776, the U.S. government, under the presidency of Martin van Buren, sought to undercut this attempt to free a nation from English oligarchical control. Canada today is still a part of the British empire. . . . 63 FOUNDATIONAL NATIONALISM DR. M. RAPHAEL JOHNSON Like Johann Herder, few who call themselves nationalists have ever read the major theorists in the field. Bernard Bosanquet is clearly one of the most glaring examples. A British neo-Hegelian and logician, his prose was far above the average nationalist in America, which largely explains why he remains unread. Nonetheless, his influence was felt throughout Germany, France and England during the 1920s and ’30s, assisting the development of revolutionary nationalist thought across the continent. . . . 68 ELECTING HITLER FUEHRER RUDOLF HESS Rudolf Hess was one of Hitler’s earliest followers. He was rewarded with the post of Deputy Fuehrer once the Reich was formed. From then on, Hess was one of Hitler’s most powerful defenders. In this speech, Hess details the various struggles the early National Socialist movement had to deal with in Germany. Hess’ words are comparatively neglected these days, but they will continually be reprinted within the pages of THE BARNES REVIEW. . . . 73 HITLER & TUKHACHEVSKY WAFFEN SS GENERAL LEON DEGRELLE Marshal Mikhail Tukhachevsky was a general in his early forties, an amazing achievement. He was commander of the entire Red Army, and according to Degrelle, was the second most powerful man in the Soviet Union after Stalin himself. Hitler truly feared the man who the German general staff called a genius. Leon Trotsky said of him: “If a military conflict were to break out, any Tukhachevsky or other would have little trouble overthrowing the government.” Indeed, Stalin feared him as much as Hitler did. . . . ...