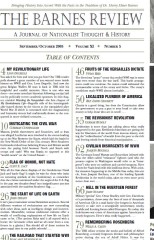 4 MY REVOLUTIONARY LIFE LEON DEGRELLE You asked for him and now you got him! Our TBR reader polls showed a great number of you wanted more inside history on WWII and Gen. Leon Degrelle. And now the great Belgian Waffen SS man is back in TBR with his insightful and candid memoirs. Here is one who was there—not some armchair historian following a script laid out by politically correct academic sponsors. In this chapter, entitled Muzzling the Vanquished—the first chapter of My Revolutionary Life—Degrelle tells of the inextinguishable hatred shown by the victors to the vanquished after World War II which is contrasted with the magnanimity and humanity victors had traditionally shown to the conquered in more civilized centuries. . . . 10 INSTIGATING THE CIVIL WAR CUSHMAN CUNNINGHAM Masons, Jewish slaveowners and financiers, and at least one alleged Luciferian were involved in the events leading up to the War Between the States, which laid the basis for the New World Order of the 21st century. Were Southern firebrands tricked into believing France and Britain would even the paying field between North and South with troops and cash? Why was Russia so opposed to this “stealth attack” on the United States?. . . 22 FLAG OF HONOR, NOT HATE CLINT E. LACY Why all the fuss about displays of the Confederate Naval Jack and battle flag? It might be wise for those who insist on removing symbols of the Confederacy to remember that the crimes committed under the aegis of the U.S. flag in the past two decades dwarf into insignificance any sins associated with the stainless Southern flag. . . . 26 THE START OF LIFE ON EARTH JOHN TIFFANY It isn’t just creationism versus Darwinism anymore. Several different versions of evolutionism are now contending with other ideas, such as intelligent design and interventionism. Meanwhile, various traditional cultures offer a wealth of conflicting explanations of how life on Earth came to be. (The ancient Kelts said it all started with a horse; the Germanic tribes said we all came from a cow, frozen in a glacier.) But should all of these notions be given equal time in our public schools? . . . 40 THE RAILROAD THAT STARTED WWI MARGARET HUFFSTICKLER England and France wanted to build a railroad from Ber - lin to Baghdad, then backed off from the idea. Germany, not surprisingly, picked up the ball. Russia, for its part, wanted a warm-weather seaport. Everyone could have had what they wanted, but instead this situation deteriorated into a war that killed millions. Was the Berlin-Baghdad railway more of an impetus for the war than the assassination of Archduke Franz Ferdinand? . . . 46 FRUITS OF THE VERSAILLES DICTATE VIVIAN BIRD The ferocious “peace” treaty that ended WWI was in some ways even worse than the war itself. This harsh arrangement could not continue. No nation could withstand the unreasonable terms of the treaty and thrive. The treaty’s conditions made WWII almost inevitable. . . . 50 LEGALIZED PLUNDER OF AMERICA REP. DAVID CROCKETT Charity is a good thing, but does the Constitution allow the government to put a gun to your head to take your money to help those who are in need? . . . 55 THE REVISIONIST REVOLUTION GERMAR RUDOLF Revisionism is more than just talking about what really happened in the past. Revisionist historians are paving the way for liberation of the world from interest slavery, ending the “redistribution” of wealth from the poor to the rich and freeing minds from historical manipulation. . . . 62 CIVILIAN INSURGENTS OF WWII JOAQUIN BOCHACA The Germans found Warsaw and Rotterdam infested with what the Allies called “resistance” fighters (and who the present regime in Washington would refer to as “insurgents”) who wore no uniform and carried weapons. Here is how the Nazis dealt with this insidious threat. With a similar situation happening in the Middle East today, this article, from Joaquin Bochaca, one of the leading Spanish Revisionists in the world today, takes on even more pertinence than ever. . . . 66 HELL IN THE HUERTGEN FOREST JOHN NUGENT Military “genius” Gen. Omar Bradley, with Gen. Eisen how - er’s permission, threw away the lives of tens of thousands of American GIs in a mad battle (the longest in American history) to take over a strategically unnecessary, murky, muddy and freezing forest called Huertgen. Yet today, this little-known war crime of Americans against Americans is nearly forgotten. Here’s what really happened. . . . 79 REMEMBERING ROSENBERG WILLIS A. CARTO The TBR editor reviews the works and beliefs of Alfred Rosenberg, a mostly forgotten thinker and philosopher active during the era of Adolf Hitler. It was for Rosenberg’s writings—published between 1921 and 1945—that he was tried and convicted as a war criminal at Nuremberg. The indefatigable writer penned two essays while waiting for the hangman. What made Rosen - berg’s works so dangerous, so threatening to “democracy” that he had to be killed? Rosenberg had the guts to discuss “dangerous” topics that inspired his fellow countrymen to look at the real causes of a culture’s demise. Find out more about this suppressed philosopher. . . . ...