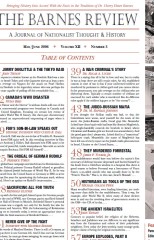 4 JIMMY DOOLITTLE & THE TOKYO RAID JOHN TIFFANY The top-secret mission known as the Doolittle Raid was a mission to bomb Tokyo and other Japanese sites as at least a symbolic revenge on Nippon for the attack on Pearl Harbor. Jimmy Doolittle is the legendary aviator who was perhaps the only man capable of pulling off this remarkable feat. . . . 12 CANADA’S WWII DISASTER VIVIAN BIRD “The Valour and the Horror” is without doubt still one of the most controversial programs ever broadcast in Canada and the United Kingdom. Focusing on certain key events of Canada’s World War II history, this three-part documentary generated an unprecedented outpouring of anger when it first aired. . . . 19 FDR’S SON-IN-LAW SPEAKS OUT HISTORIC INTERVIEW WITH CURTIS B. DALL Col. Curtis B. Dall was the son-in-law of Franklin D. Roosevelt and knew FDR quite well. In this revealing interview by filmmaker Anthony J. Hilder, Dall discusses how FDR came to be the tool of powerful, inside manipulators. Also with an article by Joaquin Bochaca: Did FDR kill himself? . . . 25 THE ORDEAL OF GERMAR RUDOLF FREDRICK TÖBEN The global hate campaign and witch-hunt for Revisionists continues. Political prisoner Germar Rudolf refused to genuflect to the claimed Jewish holocaust of World War II. So he was deported from the United States to Germany in 2005 to serve at least five years for questioning the holocaust myth, without a trial. Here’s an update on Rudolf’s incarceration. . . . 28 SACRIFICING ALL FOR TRUTH REINHOLD ELSTNER Fed up with the lies and guilt foisted upon the German people since the end of WWII, one German patriot sacrificed himself at the Hall of Heroes in Munich. Reinhold Elstner’s personal holocaust was a tragedy not only for his family but also for Germany and America. With the holocausting of Revi sionists going on so intensely today, it seems an appropriate time to publish the final statement of Reinhold Elstner. . . . 31 NEVER GIVE UP THE FIGHT INTERVIEW WITH MANFRED ROEDER In the words of Manfred Roeder: There is still a Germany, as long as there is one German left. And if that one last German goes down, he must go down swinging; he must go down with honor. It is always about honor. . . . 35 BATTLING FOR OUR CULTURE MANFRED ROEDER From his jail cell, thought criminal Manfred Roeder, still swinging, sent this powerful missive to the present chancellor of occupied Germany, Angela Dorothea Merkel, in which he minces no words. Roeder, now 75, refuses to buckle to the incessant pressure of the myrmidons of today’s Inquisition. . . . 39 A WAR CRIMINAL’S STORY DR. EDGAR A. LUCIDI There is a saying that all is fair in love and war, but in reality in war at least there are still certain rules. An old, established custom in time of war is that if your uniformed soldiers are murdered by partisans in civilian garb and you cannot identify the perpetrators, you take revenge on the civilians who are sheltering them. Typically a certain number of civilians are executed for each soldier who is murdered. But do different rules apply if the soldiers happen to be “the enemy”? . . . 43 THE JUDEO-RUSSIAN MAFIA DR. M. RAPHAEL JOHNSON If you thought the Sicilian mafia was bad, or that the Colombians were worse, steel yourself for the worst of the worst: the Judeo-Russian mafia. Good guys like Alexander Lebed have done battle with bad boys like Semion Mogilevich, who single-handedly controls the brothels in Israel, where Ukrainian and Russian girls are forced into sexual slavery. And the good guys don’t always win. Lebed died in a “mysterious” helicopter crash. Meanwhile, the name of Mogilevich has been left out of every report on the Jewish mafia phenomenon in Israel, Ukraine or the United States. . . . 48 THEY MURDERED FORRESTAL JAMES P. TUCKER, JR. The establishment would have you believe the nation’s first secretary of defense became depressed and hurled himself to his death from a 16th-floor window in a hospital. But there is good reason to believe Forrestal was a forerunner of Vince Foster, a so-called suicide who was actually done in by the “Powers That Be.” Was it, in this case, Israel’s Mossad? . . . 50 HISTORIANS AS TOOLS OF THE OSS MICHAEL COLLINS PIPER Many so-called historians, even leading historians, are nothing more than shills for the establishment. Thus it was, for example, after World War II, when many of these slickers went in and out the revolving door of government service in the OSS—the CIA of its day. . . . 53 THE ANCIENT ISRAELITES JOHN TIFFANY Contrary to popular belief, the religion of the Hebrews, Israelites and Judahites was not different in any significant way from the Canaanites and others of their polytheistic neighbors. Even today the Jews worship many strange gods, despite claims of being the original monotheists. . . . 57 EUROPE EXPLODES, PART II GEN. LEON DEGRELLE In this chapter of his memoirs, Degrelle fights to win election as prime minister, desperately wanting to keep Belgium neutral in the brewing European storm. He is smeared by the leftist newspapers as a pawn of Hitler and, at the same time, Cardinal Van Roey and his greedy minions—whose corruption Degrelle exposes to the public—demand Catholics vote for Degrelle’s opponent. Degrelle loses—and so does Belgium, the victim of secret back-room double dealings. . . . ...