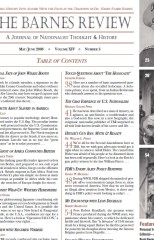 THE REAL FATE OF JOHN WILKES BOOTH PAT SHANNAN 5 A book by a family member, a signature in the Franklin County Courthouse and other evidence have convinced some that John Wilkes Booth, the killer of Abe Lincoln,may have escaped capture and lived into the 20th century. Surprisingly, many people have confirmed this theory. . . . THE TRUTH ABOUT SLAVERY IN AMERICA CLINT E. LACY 16 Contrary to popular mythology, slavery flourished under the U.S. flag. The peculiar institution was well protected under the U.S. Constitution. The federal government, the Supreme Court and international law all protected it. The North was just as responsible for slavery as the South, if not more so. And Abraham Lincoln was in no way the “great emancipator” as he is today portrayed. . . . BUSH GHOST OF AFRICA CONFOUNDS BRITISH DR. FREDRICK TOBEN 23 This dashing guerrilla leader ignored orders from Berlin, and prepared to not only repel the British invaders in Africa, but go on the offensive and attack British outposts in East Africa. Paul von Lettow Vorbeck’s plan was simple: tie down as many British troops as possible in Africa while his comrades in the trenches of Europe fought for victory. REVISIONIST WRAP-UP: WESTERN HEMISPHERE GRACE-EKI OYAMA 25 Our globetrotting Japanese contributing editor investigates recent developments in South America and the United States. Is it possible the Zionists want to set up a New Israel in Patagonia? Meanwhile, in the U.S.A., conditions are ripe for a revolution.Here’s a look at “Operation FALCON,” a plan to undermine your rights. . . . INTERVIEW WITH SIEGFRIED VERBEKE JOHN NUGENT 32 TBR recently conducted this exclusive interview with dynamic Revisionist publisher Siegfried Verbeke. For more than 10 years, government authorities, with support fromJewish-Zionist groups, have harassed, fined and jailed this brave man for peaceful expressions of dissident views. Belgian authorities have destroyed tons of his writings. Now hear from the “thought criminal” yourself! . . . TOUGH QUESTIONS ABOUT ‘THE HOLOCAUST’ GIUSEPPE FURIOSO 38 Here are a number of basic unanswered questions about the so-called holocaust. A holocaust primer, so to speak, from an Italian Revisionist who demands answers to his questions now. . . . THE GRAY EMINENCE OF U.S. NATIONALISM MICHAEL COLLINS PIPER 41 He has been described as aman ofmystery, an agitator, an anti-Semite, a troublemaker and also a God-send. But now, in a new biography, the enigmatic nationalist publisher of TBR surprised us all with little-known details of his career and life. . . . HITLER’S GUN BAN: MYTH & REALITY DR. WILLIAM L. PIERCE 44 We’re all for the Second Amendment here at TBR, but we wish gun advocates would get it right when it comes to Adolf Hitler. The canard that Hitler was afraid of his people so he disarmed them has been told repeatedly.Here’s a look at the Reich’s gun policy written by the late William Pierce. . . . FDR’S ENEMY ALIEN POLICY REVIEWED DANIEL W. MICHAELS 48 DuringWWII, FDR shipped thousands of people off to concentration camps. Even so, most never renounced America. Now that we are facing an illegal alien invasion from Mexico, is there anything in FDR’s policy worth looking at today? . . . MY ENCOUNTER WITH LEON DEGRELLE ROBERT BRASILLACH 54 Poet Robert Brasillach, the greatest writer France produced during the WWII years, was passionate about his country, to which he dedicated his life and his work. But “la libération” of 1944meant death by a firing squad. Before he died he preserved for posterity his thoughts about meeting the famous Belgian patriot Leon Degrelle. . . . STALIN’S WILLING EXECUTIONERS SEVER PLOCKER 59 A senior commentator for Israel’s Ynet News says that many of his fellow Jews “have blood on their hands for eternity” for having joined the USSR secret police and taken part in the torture and murder of millions of Russian Christians. . . . ...