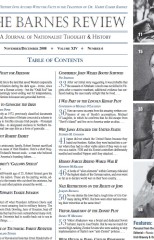 IRELAND’S FIGHT FOR FREEDOM ARTHUR KEMP 4 The Emerald Isle is the land that savedWestern (especially Roman) civilization during the dark ages—ironic, since Ireland was never a Roman colony—but the “Ould Sod” has also fought a seemingly never-ending war for independence, complete with famine holocaust and genocidal horrors. . . . . 1972 PLOT TO GENOCIDE THE IRISH MICHAEL COLLINS PIPER 13 As recently as 1972, previously classified documents now reveal, the rulers of Britain concocted a scheme to use the military to forcibly relocate Irish people—Protestant and Catholic alike—to designated enclaves in Northern Ireland. International law says this as a form of genocide. . . . IRISH PATRIOT ROBERT EMMET JOHN TIFFANY 15 From an aristocratic family, Robert Emmet sacrificed all for the cause of Irish freedom. Here’s a short biography of one of Ireland’s bravest souls—a man who believed in the ideals ofAmerica’s founding fathers. . . . ROBERT EMMET’S ‘GALLOWS SPEECH’ ROBERT EMMET 16At the still-boyish age of 25, Robert Emmet gave his life for his nation. These are his parting words, addressed directly to the tyrants who cut short his existence, but also to Irishmen and other patriots around the world. . . . IRISH REB THWARTS YANKEE INVASION JOHN TIFFANY 20 He pulled off what President Jefferson Davis said was the most amazing feat in military history. The popular Irish-born Dick Dowling, hero of Houston, beat off a federal armada that had his men outnumbered many-fold. The unfortunate Unionists had to scuttle back out to sea in the dark, poor things. . . . THE BATTLE OF TEUTOBURG FOREST REVISITED DR. INGRID RIMLAND ZÜNDEL 22 The wife of Revisionist historian Ernst Zündel tells of the upcoming anniversary of the battle that in many ways marked the watershed of world history. By decisively destroying the Roman juggernaut in the muck and mire of Teutoburger Forest, Arminius (as he was known to the Romans), or Hermann the Cheruscan, saved Germanic civilization. Without the strong will of Arminius, there might never have been an England, or a United States ofAmerica. . . . CONFIRMED: JOHN WILKES BOOTH SURVIVED PAT SHANNAN 33 After our initial story suggesting it was probable that the assassin ofAbrahamLincoln was not killed inVirginia after a massive manhunt, additional evidence has surfaced making the case nearly airtight that he lived. . . . I WAS PART OF THE LINCOLN KIDNAP PLOT CONFESSION OF MICHAEL O’LAUGHLIN 36Here are some excerpts fromthe amazing written confession of one of Booth’s accomplices, Michael O’Laughlin, in which he confirms that he did escape from “Devil’s Island” and live on inAmerica under an alias. . . . WHY JAPAN ATTACKED THE UNITED STATES STEPHEN M. GOODSON 41 Japan did not attack the United States because they hated our freedom. Rather, they were backed into a corner where they had no other viable option if they were to survive as a nation. FDR and his Zionist controllers deliberately needled and needled Nippon until they attacked. . . . HIDDEN FORCES BEHIND WORLD WAR II KENNETH MCKILLIAM 46 A horde of “alien elements” within Germany ridiculed the highest ideals of the German nation, and even went so far as to declare world war on their host country. . . . NAZI RESTRICTIONS ON THE RIGHTS OF JEWS JOAQUIN BOCHACA 50No one denies the Jews had a rough time of it in Germany duringWWII. But how were other nations treating their minorities at the same time? VIKTOR ABAKUMOV & THE ZIONIST PLOT DANIEL W. MICHAELS 53 Viktor Abakumov was a brutal and dedicated Soviet torturer, loyal to Josef Stalin. But he was no match for several high-ranking Zionist Soviets who were seeking to stop implementation of Stalin’s new “anti-Zionist” policies. . . . WITH HITLER IN PARIS: GIESLER REMEMBERS CAROLYN YEAGER & WILHELM MANN 58 Here is a side ofAdolf Hitler that one seldomencounters. An architect and confidant of themost-hatedman in history tells us of Hitler the human, aman who was an artist himself, and deeply appreciated the creative abilities of even those who were called his enemies. . . . ...